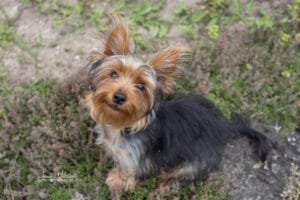 To save our applicant’s disappointment and to save us having to disappoint so many people who will see this adorable Yorkie puppy and want to apply, we are prefacing Andre’s bio by saying this…Andre came to us as a headstrong, confident pup who had been abandoned.  The pound staff that took him in sent him to our rescue as they saw that Andre needed more than they could offer him.  He may look adorable but Andre was a total land shark when he didn’t get his way.  He would bite when frustrated and this was not puppy nipping.  Andre bit with intent. He had learned in his prior home that he could call the shots and get his way by biting.  Thankfully Andre is very young and we had an available foster mom who is very experienced and adept with obedience training. In the many weeks she has had Andre she has worked with him, shown him leadership and direction, corrected his behaviour when needed, shown him what behaviours are wanted, shown him that biting and temper tantrums don’t get you what you want and if you listen and follow direction you get rewarded.  She also started immediately in obedience work with him and taught him structure.  We are very proud to say that Andre is now a lovely puppy, he still has spunk, as all terriers do, but it is appropriate and manageable. Andre is worked in advanced obedience skills, agility AND rally and is a rock star in all disciplines. He wants to work!!  We are ONLY looking for a family or person for him that has a solid base of obedience training and has worked a headstrong, confident dog at advanced levels.  We are looking for his person to take him through to advanced levels of obedience and then a dog sport like agility or rally and has experience with that.  We will not consider applicants for Andre that cannot meet these requirements.  Why do you ask?  Because Andre is on the right path now and is a dog that is a joy to live with and work with.  But, he will regress quickly back into that obnoxious, bitey pup if his structure and training aren’t kept up. This won’t be fun or cute when he is full-grown and more assertive.  So yes, we are taking a hard line with who we are looking for to adopt Andre, but we do this out of dedication to Andre and wanting the very best for him. We know this will limit the applications we receive for him, but all we need is the one perfect fit.  So please, if interested in Andre and wishing to apply, tell us your experience and credentials in the application that would make you a great fit for him.  We know that his perfect person or family is out there and won’t settle for anything less. Competitive Rally/Agility people, we are looking for you!!  Now more on Andre…..

This gorgeous little guy may look like the most adorable little lap dog, but don’t let his sweet face fool you, Andre is anything but a lap dog. Andre is a 4 and a half-month-old highly independent, gregarious, and very active Yorkshire Terrier with legs like springs. He loves learning new tasks and enjoys his training sessions. While he will not sit quietly in your lap because there are just too many exciting things to do, he does love cuddles and snuggles, neck rubs and being petted. He can be carried around and will sometimes tuck his head under your neck and make happy puppy grunts.

A rambunctious puppy, he loves all toys, soft toys, wubbas, balls, ropes, tug toys, squeakys and anything he can find to play with including rocks, sticks, socks, blankets, towels, minions, etc. Andre will play with anything he can get his little paws on. He is into everything. He is curious by nature and loves to investigate everything nook and cranny. True to his terrier heritage care should be taken by his new family to remove harmful items that he might find and try to play with. This includes plants as Andre loves eating plants.

When I first met Andre he was a tiny, nippy, 4lb puppy found as a stray, who was full of personality and given to temper tantrums. Since then he 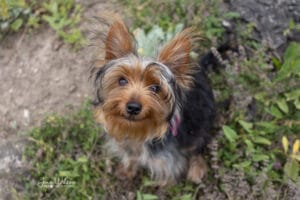 has grown in both size and weight and character. He has a very outgoing, fun-loving personality. Andre is absolutely comical to watch in both play and training. He loves to pounce on toys and do somersaults full tilt and then roll all over the grass. This fun-loving energy can easily manifest itself into less desirable behaviours when he gets “ramped up”. Therefore his new family should have the patience to work through Andre’s current behaviours and provide calm, firm, consistent guidance.

Andre will let out a high-pitched whining followed by barking when he wants to go out for a poop. But we are still working on his housebreaking. Although Andre stays dry in his crate all night, during the day when he is out of the crate, he can get over-excited and worked up and it is hard to tell whether he just wants attention or if he is trying to tell you he wants to go out for a pee. So he has had a few pee accidents as I have misread his cues. Most of the time these are avoided by taking him out for his 4 walks a day and letting him after he has his naps.

Andre is being taught to chew on his own toys and luckily will happily chew on nyla bones that can be safely left in his crate with him. Andre will need some time to develop his in-house manners. As he is still a puppy he has to learn what he can chew on.

Andre is a very smart dog that needs constant mental and physical stimulation to prevent him from getting bored and frustrated.  I have started doing rally obedience and puppy agility training with  Andre.  He loves the training and treats that go with it. Andre will do almost anything for a treat. Andre also responds well to rewards such as neck rubs, and tugs games with toys. He understands the rally and obedience commands “sit”, “look at me”, “front” (sit in front of me) , “get around” (go to the right and round into a left sit) , “get in”  (loop into a left sit from front position), “slow walk”, “fast walk”,  “walk it” (walk along a beam), “let’s go” “get it” (fetch a toy) , “bring it” (bring the toy back)  “take it”, “leave it” “up”,  “off” and “wait”. He will come to a whistle (almost always) and is about 90 % efficient at coming to the word command “come” when outside even with distractions.  In agility, he has been started over small jumps( “over” command)  and 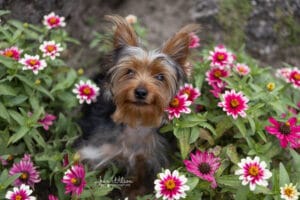 will lure through the weave poles and go through his puppy tunnel. Andre would excel at Agility and Rally competitions because he loves to jump and run along benches and rock walls and crawl under things and because he loves to learn new tasks. It is also possible that Andre could be trained in tracking as he sometimes is very Beagle like when he gets on a scent. Andre also enjoys running and when he is older and his growth plates are properly formed would make a great short distance slower running companion and/or hiking companion. I have not yet had a chance to see if Andre likes to swim.

Andre is easy to redirect if he gets excited and stimulated or distracted by other dogs and people by using toys, treats and engaging in training exercises. Or even just by running away in the opposite direction as Andre does not like his human companions to be out of eyesight when he is outside. Andre compensates for his short height by standing as tall as he can on two feet and walking like a bear when he wants to look at something.

Andre is less obedient in the house and does not want to come if he finds something interesting to get into. However, with maturity and consistent training, he will learn how to behave in the house as well. He has already shown great improvement since his first week with me.

Andre is a friendly dog that loves people although when excited still occasionally gets nippy. Andre is getting better with this and we have been working on greeting humans in a quiet sit and accepting treats as Andre gets very excited and likes to jump up. He understands the  “off” command but forgets he shouldn’t jump up in the first place.

Andre also loves other dogs and responds well to the cues of older, well-adjusted dogs. Andre would do well in a home with another calm, well-adjusted adult dog that could be a good role model for Andre and that might help him burn off some of his energy with doggie play.

Andre slept quietly through the night from the first night he was at my house and every night since. Andrew crates well and can be left in the crate for a few hours without suffering any separation anxiety. He rarely barks when he is crated.  Although he will bark if left outside alone and will bark to get your attention. He finds his crate a calming environment. 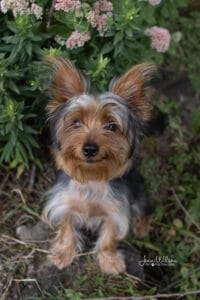 Andre rides quietly in the car inside his smaller crate and will wait until you reach in to carry him out of his crate as it is too high to jump out of the car.

Andre also rarely barks when on his walks even if he sees dogs and kids or bikes sailing by. Andre really only barks when he wants something (dinner, out for poop, attention, a toy). He will bark briefly when visitors come over and will stop barking after been greeted.

Andre’s ideal home would be a calm environment with another adult dog that still has the energy to play and has patience for puppy antics. As well as a secured fenced yard as he loves to be outside. Andre is small enough to fit through small spaces. Also because Andre is easily overstimulated, especially by loud repetitive noises, a home without children is what is best for him. Andre’s new people should have time to continue with the training that Andre has started and be fairly active so that he can grow up to be a well-behaved, happy and content dog.