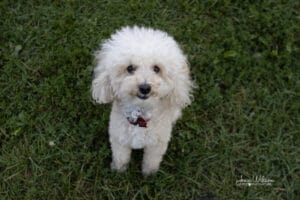 Meet April, one of the smartest dogs you will ever meet!  We ask that you please read her bio in detail as April is far more than her cute looks.   She is very active and highly motivated to work.  She needs a lot of daily exercise and challenging obedience work to keep her mind and body active.  April is a working dog in a small, fluffy body.  She is not a lap dog or suitable for those looking for a dog to cuddle with them and just go for strolls around the neighbourhood.  Please only apply for April if you are very active and committed to advanced obedience and dog sports.  April spent her 1st many years not being properly stimulated and was surrendered because of this. She is an amazing dog with the proper fit and her foster dad adores her, but again, the proper fit is key.  If you are still intrigued then please read on and find out more about this fantastic little dog!

April is a 5-year-old  Toy Poodle. She is an average size for the breed, weighing approximately 8-9 pounds . She is snow white and has a single coat of curly fur. She doesn’t shed and is hypoallergenic. Despite her small size, she is very athletic and runs and jumps with great coordination. April’s favourite things are getting out for a walk and meeting new people and she approaches both with a great deal of enthusiasm. She hasn’t shown any aggression while in our care.

For the first part of April’s life, she was owned by an elderly couple. She was well looked after by their vet, but they couldn’t give her the stimulation she craved. She was ultimately abandoned when they decided they were not able to care for her anymore. Despite this, she is an incredibly social dog who charms everyone she meets. She didn’t get out for many walks in her previous life, so when she came into our care she treated every walk like it might her last. This has improved over the last month as she is getting much better at not tugging the leash. When passing a stranger on a walk you can tell how curious she still is to meet them, but with a gentle reminder beforehand, she will contain her excitement and keep walking. 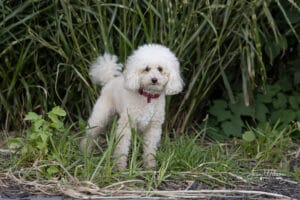 We cannot stress enough, April is a high-energy dog. She is currently walked 5 plus km a day and can handle that and then some. This is not a dog for casual strolls; she just won’t be happy unless she is getting her energy needs met.  We are seeking a family or person for April that is very active and is wanting a hiking/running/walking companion keen for all adventures but in a fluffy small white package

April doesn’t bark very much, but she can give her owner a warning when she hears a loud noise outside. She rarely barks more than a couple times, and positive reinforcement when she is quiet has reduced this in the last month. She was not previously crate trained but has really taken to it.  Her preferred place when in the home is right next to me, but if I’m otherwise occupied she’ll head into her crate to lie down. She also makes a beeline to her crate anytime she is given a large treat so she can be alone with it. April had some issues with separation anxiety when she first came into our care (being abandoned will do that) but this has been greatly reduced with good habits. Making sure she is well exercised before leaving, treating coming and going as no big deal, and leaving her with a chewy treat or well packed Kong has almost entirely eliminated this problem. That being said, her ideal family wouldn’t involve her being alone all day, as she’s just so sociable she wants to be around people.

April would absolutely like to have some dog siblings. She’s met a couple of dogs while in our care and has been very curious and interested in them. She hasn’t met any cats but she picks things up so quickly I’m sure she’d do well with a dog-savvy cat. April hasn’t spent a lot of time with children but she loves having the neighborhood children fawn all over her. The busier the home, the more attention for April, and she’s making up for lost time!  A home with older children (over 8yrs of age)  would suit April just fine!

Poodles are an incredibly smart breed and April is no exception to that. She came to us only knowing her name, but she’s already learned how to sit, stay, lie down, shake a paw, go to her crate and play fetch. She is still getting the hang of executing these commands when she’s excited by a visitor, but continued 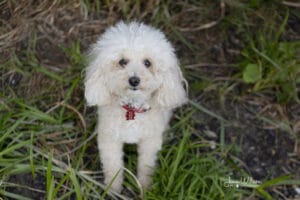 socialization will improve this and she’s already come a long way. April will be an absolute star at post-adoptions obedience school! April loves to walk and walks for over an hour without slowing down. With her smarts and athleticism, she’d make a great agility dog. She wants to work and please her owner and values praise even more than she enjoys treats.  .  We are looking for her people to exercise her mind and body with an activity like agility or similar.   After a long walk she’s perfectly fine to curl up next to (or on top of) her owner, or even take a rest in her crate.

As much as April would enjoy a fenced yard to explore, it isn’t a necessity. As long as she’s getting regular walks and social interaction she’d be just fine in an apartment. She wouldn’t like being left alone in a yard to entertain herself as she’d get bored and bark at passerby’s. She wants to get out for walk or play some fetch with her humans.

April is happy to sleep in her crate and is quiet in the morning until I’ve opened the door to let her out.  She’ll coming running out because she knows its time for her first walk of the day. She might whine softly to remind me she’s ready to go. She goes for an average walk in the morning (about half an hour) and a longer one after work (an hour or more) and then a shorter one right before bed. She’s quite reliable to do her business very early into a walk. She can make due with a few short walks and some indoor fetch on a, particularly rainy day. She eats her kibble with no issues and doesn’t beg much.

April was pee pad trained in her previous life. House training her was relatively easy as she’s so smart. As long as 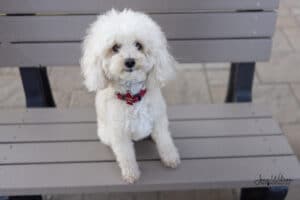 she goes out regularly she hasn’t had any accidents in the house.  She had a few accidents at first when left alone due to her separate anxiety but with the actions described earlier, those have been completely eliminated. While she has picked up commands very quickly, she still gets quite excited at times.  She can’t be trusted off a leash and needs a secure martingale collar.

Her previous family did keep her vetting up to date and she hasn’t had any health issues in our care. She was on a food designed for sensitive stomachs but we haven’t had any issues transitioning her off of that to healthier food.

If you want a lap dog that will entertain herself, April just isn’t for you. She wants to work, she wants to walk and most importantly she wants to interact with you! I can assure you she will pay back any attention you give her tenfold! April is ready for her new home and cannot wait to meet you!