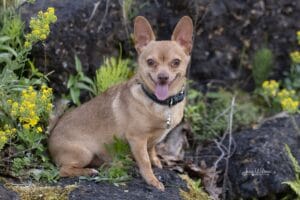 Meet Balki. He is a 7 year old Chihuahua mix. He currently weighs ~9lbs.  He is a small boy with a big personality. Balki has a very soft light brown coat that does shed. He has light brown, almost gold eyes that are always on the lookout. He is a very sweet dog with a sweet and loving personality.

Balki was surrendered by his family to a shelter. Unfortunately for him they were moving and for unknown reasons they were not able to take him with them. When he came into the rescue he had not been neutered yet and was marking in the home.  However he has since been neutered and the marking has stopped.  Balki is very nervous meeting new people.  If given the time and space to approach new people on his own he quickly warms up and looks for pets.  A home that is not too busy and noisy is needed for this little guy.  He appears to like routine and it’s what makes him happy. He would love a home with a fully fenced yard that he can run and play in. He loves patrolling the perimeter of the yard and rolling in the grass.   Balki loves going for walks, he gets so excited when he sees the leash.  He does a little dance and knows that it means he is going for a walk or maybe a car ride.  Initially on walks he is pretty zig zaggy and stops to sniff absolutely everything.  Once he gets that out of his system he still likes to sniff here and there but he walks much better.  He does get nervous if strangers get too close or sometimes if there are loud noises on our walks but he walks quite well when it is quiet in the neighbourhood.  His person needs to be his voice and to tell those approaching who want to reach out and pet him to please give him his space.  He doesn’t need the stress of random strangers trying to pet him.  But he can certainly make friends with his family’s regular visitors if allowed to take his time and approach on his own.

Balki is calm indoors but will bark if someone comes to the door or someone new enters the house. He does not like it when he cannot see his humans!  Balki will sleep quietly in his crate at night as long as it is in the same room where the humans are sleeping.  If however he cannot see his people he will bark. We have been working on this with him, but it will take time, patience, consistent training and commitment for him to gain the confidence to know that he is ok without his people being visible to him. This is something anyone interested in adopting Balki needs to understand and be prepared to continue to work on with him.  For this reason apartment, condo, townhome or semi living is not ideal for this little guy since he does bark when left alone for any length of time.

What Balki loves and looks forward to at any time is pets, snuggles, scratches behind his ears, under his chin and belly rubs. He wants to be loved on constantly if you are able.  At the same time while I have been working from home he will lay contentedly and quietly in his dog bed in my office while I work.

Balki is housetrained but so far has not let us know vocally when he needs out.  We just have a regular schedule 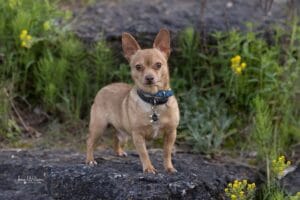 where we let the dogs out and that seems to work for him.  Balki has not met any small children while with us so we aren’t sure how he is with them. I would say due to his hesitancy and concern with strangers and his small size he would need an adult only home and no visiting younger children.

Balki does not seem to know how to play with toys or he just isn’t really interested in them.  He has several toys that we have introduced him to but he hasn’t done much with any of them yet.  There is a nylabone he has started to gnaw on and one soft stuffy toy however that he will pick up and carry from place to place sometimes and I was even able to get him to play with me once with it.  He just wants pets and scratches mostly.

Balki has been good with our resident dog.  There are rare times he wants to play but most of the time he doesn’t seem terribly interested in a lot of play.  If our girl who is pretty high energy and who wants to play all of the time gets too playful he doesn’t hesitate to let her know that he isn’t interested. He will lay next to her in different areas of the house and follow her around the yard but is also ok to be exploring or laying on his own without her. He would definitely do well with another calm dog in the home or one that will quickly pick up on his cues.  At first he seemed to ignore our cat but as he settles in more he wants to chase the cat so a home without a cat is best for him. 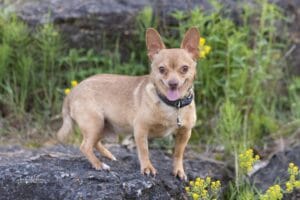 He doesn’t seem to understand basic commands with the exception of “no” which he does respond to.  He will come most of the time as well if we make a sound by clicking our tongues.  We are working on “Come” with him right now. He likes food but can be picky so finding the right treats to motivate Balki for training will be important.  Balki’s new family will need to commit to continuing  to work on building his confidence and working on obedience training to bring out the best in this little guy.  Balki will also benefit from the socialisation he would get from group training sessions.

Balki has a clean bill of health.  He does have tartar build up on his teeth but we have been told that is nothing some good old dental chews won’t take care of. He didn’t require a dental at this time.   So far we have learned that he loves little bits of apple or cooked sweet potato but is not a fan of sweet peppers, carrots or cucumbers.  Seems like this boy has a sweet tooth! As far as store bought dog treats go we have learned that he loves the freeze dried liver treats.

Balki is a very sweet, wee little man who just wants affection. I just know he’s going to make some family a wonderful, goofy and loving companion.  If you are calm, patient and loving and can help Balki to build the confidence he needs, then this little fellow is waiting for you.