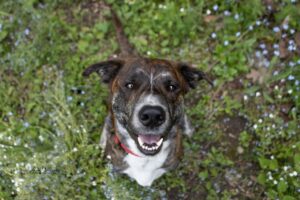 Introducing, the one and only, Berkley the “wonder” dog. One look at this 2 year old and you’ll know why we call him the wonder dog; ‘I wonder what breeds he consists of?’. Berkley is a Bassett Hound x Terrier, with a Basset Hound body/stance and Terrier ears and face. He is a lovely brindle color and at times, reminds you of a cartoon character. He truly is a one of a kind, they broke the mold when he was born.

Berkley was a stray where surprisingly, no one came to claim him. We are fortunate to foster such a sweet and happy dog. He has soft, silky fur which surprisingly doesn’t shed a lot. He is smart as a whip, will eagerly work for his favourite treats and an abundance of praise. He is house trained and had only a few potty accidents the first few weeks as he didn’t know how to tell us he needed to go outside and we didn’t know how to read him yet, but he is learning to sit by the patio door as an indicator. We are attentive to him and let him out 2-3 times during the day and this is working just fine for him. His first walking experience was to pull, but that was quickly corrected with the use of a gentle leader. This is a must for the adoptive family, as he continues to have a strong prey drive and will try to chase little furry and feathery things. Being the low to the ground powerhouse that he is, the Gentle Leader helps his walking manners tremendously and he doesn’t mind it. He needs 2 good walks a day at a brisk pace as he is an athletic guy and he needs to burn off some of that energy…leisurely strolls just won’t do for him. Berkely LOVES to round out his daily activity with a good game of tug in the yard and a few laps of zoomies. Oh, and when he gets his zoomies, he can jump and run with height and speed despite what those stubby legs might lead you to believe. It should be noted, when Berkley is coming over to show his love and excitement after playtime or zoomies, he doesn’t know his own speed and will come blazing in. If you are not prepared, you could be tumbled over with a solid 45 lb dog with a wagging tail! He certainly doesn’t mean any harm; he is just not good at judging when to apply the brakes. With continued training (which he rather enjoys) he could be a great dog for agility sports. Calming him down when he gets zoomies is a work in progress and for this reason, he should be in an adult only home. 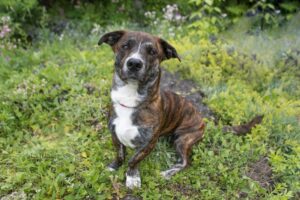 He will accidentally bowl children over and he needs firm and consistent guidance to fine tune his awareness of boundaries. A home without young children is best for him; adult only or with teens would be fine. At the end of the day, when it’s time to settle in for the night, we simply say ‘crate’ and he happily enters his crate. On occasion, he will have put himself into the crate without us asking. When he is in there, he waits there until he gets his dog treat, we close the door and there is not a peep out of him until morning. He is content to leave the crate in the morning at whatever time suits our schedule, very adaptable I must say! He does have some crate time during the day to keep him used to it. Berkley would love a family where either someone works from home or can come let him out during the day for a quick play and bathroom session. He loves his people and the more time he can spend with them, the happier he is.

Our favourite characteristic of Berkley is his ‘love’ of belly rubs, affection and snuggling up with his humans. If you are sitting on the floor, Berkley believes this is an invitation to come over, sit and snuggle, which eventually leads to him on his back with his legs in the air, head tilted back, eyes closed and almost snoring! He will stay in that position for as long as you are willing to rub his, belly, ears, chin, legs etc. We are happy to say, Berkley is accepting of ‘handling’. He allows us to check his teeth, remove something from his mouth, be it a stone, stick etc. If he has food in his mouth, it’s all for him unless we tradeoff for something even more exciting. We look in his ears, check his nails, look for ticks, in all the right places. He is game for whatever. He is patient when we need to dry him off after a walk during rain, or if we need to wipe mud off. He has developed a connection with 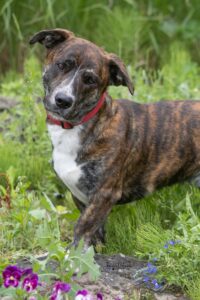 one person in the house and is always searching to be near his #1 human. That does not mean he has no interest in the remaining 2 adults in the family, but he has his priorities. We are working on this, as a ‘hyper bond’ could become problematic, so this would be a work in progress for the adoptive family. He needs all members of his new family to play active roles in his training and day to day care so he doesn’t become a one person dog.

Berkley has quite the vocabulary of grumbles and can have an imposing bark. Although he is not a nuisance barker, when people approach the house, he will make sure you know they are there. He is after all, potentially saving your life from that delivery person! He is learning who ‘regular visitors/neighbours are’ and who is a stranger, at least to him. We believe Berkley’s love of people and strong bond with family has the makings for a loyal and affectionate family pet who just wants to keep his people safe and he really doesn’t mean harm. Berkley is also a guy who does not like to be disturbed or unexpectedly surprised when he is sleeping. He will let out a grumble to let you know his thoughts on that. All he is asking is, announce your presence and call him over to you. I mean fair, most of us don’t like being woken up or disturbed during our rest time unexpectedly!

Being both a Hound and a Terrier, Berkley has a strong prey drive. He should not be in a home with small animals including cats as to him, these are things for chasing. He is working on boundaries and controlling his need to chase when he sees them, but this will be an ongoing training focus for his future family. Berkley will be looking for a home 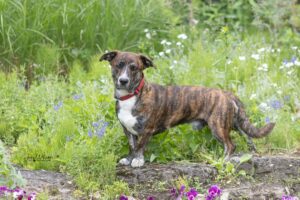 with a securely fenced yard where he can burn off energy along with his daily walks, and enjoy nature without fear of chasing a little critter and finding himself lost in the process. He is not a dog that can be trusted off leash at this time as his desire to chase and follow scents is too strong right now. Berkley will not be a dog suitable for dog parks and we are looking for a family committed to advanced training and socialization to bring out the best in this very smart, very athletic and capable guy. He is sociable with other dogs and enjoys calm meetings and walks, but at this time feel he would prefer to be the only dog in the home, or have a mature dog that won’t pester him to wrestle in the home.

Berkely comes with a clean bill of health and he is ready to take on the world and do ALL of the adventures with you. If you have read his bio this far, you most certainly are interested in this ‘one-of-a-kind’ dog. We are committed to find the perfect forever home for Berkley, as all foster dogs deserve a second chance at a wonderful, loving and long life with their owners. Apply if you think you are the perfect home, Berkley would love to know more about you!