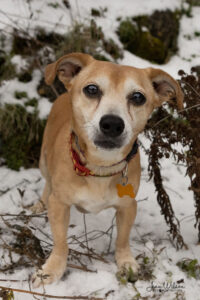 Dobby is a super cute and spunky 13 year old Jack Russell Terrier/Chihuahua mix who is 22lbs although his ideal weight will be 20lbs. He has a big personality and always has something to say. Despite his age, Dobby has a zest for life and is full of energy. He will never turn down a walk or run in the backyard. We know his age as he came to us microchipped already and we were so surprised to discover that he was 13!! You would never know it; this guy has plenty of life left in him and all the energy and desire to be active and to have fun.

Dobby came to us from the pound as an unclaimed dog so we have very little information on his background. He was very overweight with fat pockets all over his body. This really breaks our hearts because this boy LOVES his walks. We have been working hard with diet and exercise to get him to a healthy weight and are super pleased with how well he is doing so far! Anyone considering Dobby needs to be committed to continuing the work we have done in getting him to a healthy weight. We don’t want to see Dobby return to his obese state where he couldn’t enjoy life like he does now. He has been put on a high quality diet and we have incorporated a lot of walking into his life. He is currently getting walked 2-3 times a day and has no trouble going for an hour at a time. He is good on leash but will pull if he gets excited. Anyone considering Dobby will need to be avid walkers as this boy lives for his walks and won’t be happy just being out in the yard. He would like multiple walks a day please. Dobby will react to other dogs by barking and pulling if they are also reactive. Keeping his attention is key. He will ignore other dogs if they don’t react though. He has enjoyed many pack walks with other PDR dogs and has always been a good boy; the terrier just comes out in him if another dog is being barky or jumpy. He doesn’t like that and lets it be known.

Dobby is a stubborn little man, again, true to his terrier side, but there isn’t much he won’t do for 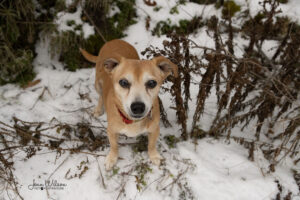 food. He will sit or lay down on command but will bark if you wait too long to give him his “good boy” treat. He will always watch diligently while you prepare his meals, whining in anticipation. He really enjoys vegetables such as peppers, sugar snap peas and carrots. He also absolutely loves apples. We use veggies a lot for treats for him as he loves them so and they are so much healthier for him that commercial dog treats.

Dobby can be a vocal dog. He is a Jack Russell terrier and Chihuahua mix after all. He will bark whenever he gets excited; it is something his fosters have been working on. He listens well when you say “no” and will stop. But he needs to be reminded that barking in the house isn’t fun for anyone but him. He has a funny side to him though in that he likes to look you straight in the eye and use a variety of mumbles and grunts and growls to “talk” to you and it really seems like he thinks you are understanding him. 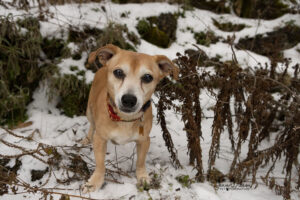 He is quite the character!! Dobby is crate trained, spending his nights in his crate well. His fosters do suggest keeping up with his exercise and daily walks or he will get restless being cooped up in his crate. Dobby is also fully house trained and will let you know when he needs to go out by laying by the door. Because he can be vocal at times, and because he loves so much running around in his fenced back yard, apartment or condo living will not suit him. He would be best in a detached home with a fenced yard.

Dobby is fostered in a home with another dog and has made some friends while in his foster home, so we know he’s good with other dogs. He has no problem with small dogs but is respectful/ cautious of larger dogs. He would not enjoy living with a larger dog as they make him nervous, but he could live nicely with a mellow and gentle natured small dog. 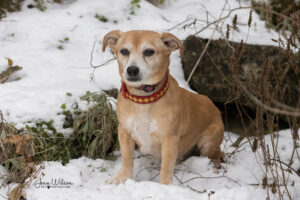 He is also fostered in a home with cats and is very good with them as well.

Dobby would prefer an adult only home or one with teens. As an older boy he needs gentle handling and respect for the sore joints he gets from time to time, particularly on damp days. He doesn’t like his feet handled on the best of days but on damp days his arthritis kicks in and then he really wants his front legs in particular left alone . This needs to be respected. This doesn’t mean that he won’t enjoy meeting children out on his walks. He quite likes to meet all kinds of people. And, because he enjoys walking so much and is taken out on a good amount of walks daily in his foster home, his nails don’t get long and are naturally ground down.

Dobby’s favourite activity is to greet his foster family at the door, tail wagging and then to be chased around the house. To Dobby, life is fun and goofing around with his humans is his favourite game! This old gentleman has a lot more goofing around to do!