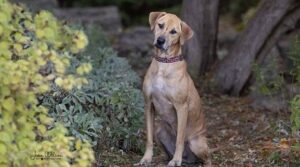 Fawna is an 8-year-old Black Mouth Cur that weighs 14.9kg (32.8 pounds). If you haven’t heard of that breed before, don’t worry, its only recognized as a breed in the US and popular in the southern states. She is essentially a lab/hound mix. She came all the way from Florida and was very much neglected and underweight. You can still see the calluses on her butt and elbows from laying on concrete most of her life. However, despite her previous conditions, she is one of the sweetest and friendliest dogs around. She ended up in an Ontario pound which is how we came to meet this lovely dog. Human and animal alike are all potential new friends to her.

Fawna has been a dream dog while living with us in our apartment. She’s quiet and calm except when she knows she might be able to get a treat. More on that later though. She uses the elevator and stairs with no issues. She is fully house trained and hasn’t had any accidents. Fawna lets us know she needs to go outside by waiting at the door until you notice her, or if she really needs to go out, she will whine in the hound fashion to get your attention. She will benefit from living in a house with a backyard as she loves spending time outside exploring. The few times we’ve been able to have her off leash in a fenced area she has just reveled in the freedom and ran circles around us in joy.

She is fully crate trained and at night we simply say “bedtime” and she goes in to wait for her bed time treat. Occasionally she will whine a bit but settles very quickly. Fawna has occasionally been crated during the day for 4-6 hours at a time and had no issues there either. Due to her past she doesn’t enjoy lying on hard surfaces. As a result, her favourite 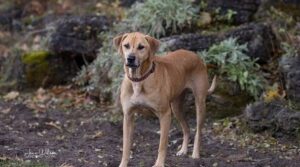 places to curl up are the couch, her bed, her crate (which also has a small bed in it), and most recently the padded circle chair. Instead of a crate (which is currently in the living room), Fawna would probably prefer to sleep on her own bed near her humans.

Fawna has no issues with handlings. In fact, she loves being brushed and had no issues when she had a bath (though she wasn’t thrilled about it) or has her feet dried off. Within a couple days she was already on her back asking for belly rubs. She also loves to curl up next to her humans in hopes that she will get constant pets!

Fawna enjoys her daily routine and tends to sit by the door if that routine is upset at all. She mostly wants to make sure we don’t try and leave without her! She is a very smart dog, which lends well to training.

Speaking of training, Fawna is quite food motivated and when presented with a treat she might try to do all the “tricks” at once simply to get the food in her belly as fast as possible. So, we are working on simple, single commands. She currently knows sit, and paw, and has recently learned “down.” Fawna doesn’t enjoy laying down on hard surfaces so we’ve had more luck on her bed and carpets. She may get a little vocal as her patience starts to decrease but will eventually listen and produce. She does have her sassy side and that is quite entertaining. Fawna knows her name but sometimes struggles with recall when there are so many smells around. However, we’ve found that the more she gets use to an area, the better at listening she gets as well. 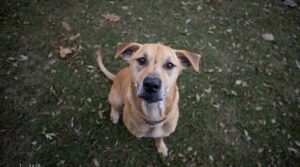 While on walks, we are currently using a gentle leader to help control her overwhelming desire to smell everything. When Fawna first entered our lives, she pulled a lot (on a flat collar) due to the adventurous hound part of her. After we started using the gentle leader, she has really become a great walker. There are times when you can tell she is on the trail of some squirrel or rabbit, but she won’t chase the scent as vigorously as before. You’ll also notice that she wants to greet all the people and dogs and is sad when they are on the opposite side of the street. The dogs she has met she usually wants to play with. She has good manners and would probably love a dog sibling to spend time with but this is not essential. She’s very gentle around humans, including kids. She does this thing where she will come up close and very gently lick your lips and only your lips. Her favourite people are always the ones with treats though.

She currently goes on 3-4 walks a day totally around 1.5-3 hours a day. She will play some tug and maybe catch. We haven’t had the opportunity to see her playing outside off leash, however, since she is smart, she could definitely learn. Her favourite toys are softer ones, specifically her rope, caterpillar and bear. She tends to not be interested at all in hard 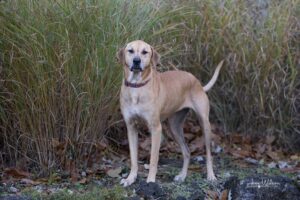 chew toys but loves a good bone. She usually doesn’t play for long either so it’s a simple burst of joyful playing then back to resting.

Fawna travels really well in the car and sits in her hammock back seat with ease watching and pondering life’s mysteries. Sometimes she will sleep too, but only after an intensive walk. She’s travelled almost two hours in the car and had zero issues.

Fawna prefers when all her humans are in the same room and tries to get as close as possible. Usually resting her head or paws on your leg. Sometimes she gets really needy and decides she needs to sit between us. But it’s in those moments that you realize how great of a dog she is. Not only is she friendly but truly caring. She has a big heart that will fill any home with lots of love. Whichever person or family ends up adopting this dog will be very lucky and will have a friend for life with Fawna.