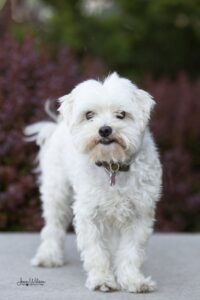 Foofur is 7 years old. He is slightly undersized for the breed, weighing approximately 7-8 pounds. He is snow white and has curly fur that is soft to the touch, but doesn’t shed much. Foofur’s favourite thing is to curl up next to his person and have a nap, but he also likes to get out for a couple medium duration walks a day.

Foofur was surrendered to a pound in Quebec as his original owners said he was not getting along with his doggie siblings. He has not shown any issue in our care though and has been very easy to manage when coming upon another dog when we are out on walks. Given his history, it would be best that he goes to a household where he can be the only pet. He would do alright with older children, but wouldn’t want small children in the home as he has more of a low key demeanour

Foofur doesn’t bark very much, but can give his owner a warning when he hears a loud noise outside. He rarely barks more than a couple times, and positive reinforcement when he is quiet has reduced this in the last month. He can bark when guests arrive at the home, but settles down quickly. Having him greet guests outside, or having them arrive while he is in his crate and then letting him out are good strategies to have the visit start off stress free. He was not previously crate trained but has learned to accept it and will quietly sleep in his crate as long as he knows his owner isn’t too far away. He has some issues with separation anxiety (being abandoned will do that) but 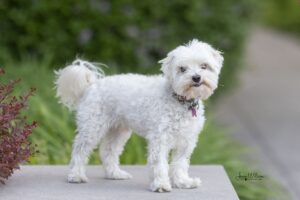 this is slowly improving with good habits. Making sure he is exercised before leaving, treating coming and going as no big deal, and leaving him with a chewy treat or well packed Kong has helped him take steps to improve his independence. That being said, his ideal family wouldn’t involve him being alone all day, as he wants to be around his owners, even if he’s just quietly curled up next to them or lying at their feet as they work from home. 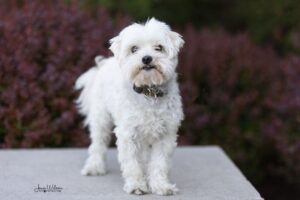 Training has been quite easy with Foofur. He didn’t have a name when he came to us but learned his very quickly, he has also learned to sit and go into his crate and understands ‘no’ and ‘leave it’ very well. He is not desperate to please his owner by performing tricks but he responds well to positive reinforcement. He is well housetrained and hasn’t had any accidents in the home since his arrival. Further training in obedience school with Foofur will reinforce the good habits he is already forming.

As much as Foofur would enjoy a fenced yard to explore, it isn’t a necessity. As long as he’s getting regular walks and social interaction he would be just fine in an apartment. He wouldn’t like to be left alone in a yard to entertain himself as he’d get bored and bark at passerby’s. He wants to get out for walk and then curl up somewhere comfy near his human.

Foofur is happy to sleep in his crate and is quiet in the morning until I’ve opened the door to let him out. He’ll coming running out because she knows its time for his first walk of the day. He goes for an average walk in the morning and after work (around half an hour) and then a shorter one right before bed. He’s quite reliable to do his business very early into a walk. He can make due with a few short walks on a particularly rainy day. He eats his kibble with no issues and doesn’t 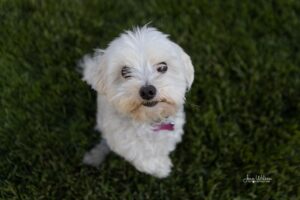 beg much. When happening upon an other dog or other stimuli (like a squirrel) he shows interest but it is very easy to redirect his attention and keep him moving. He rarely tugs the leash, sometimes I need to look down to make sure he’s still there, as he is quietly keeping perfect pace right beside me.

Foofur was in relatively good health when he came to us, save for his teeth. They were badly deteriorated and many needed to be pulled. The rest of them were cleaned up and he still has approximately 15 teeth remaining. He is still able to eat his kibble and he rebounded very quickly from his dental work. He came to us already neutered and has since had all his vaccines up to date.

If you are home a lot, and looking for a household companion that will get you out for a few walks, look no further than Foofur!