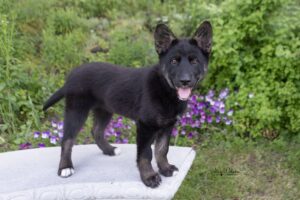 Freyja is an 15-week-old female Husky mix who currently weighs a whopping 18lbs and growing!!. Freyja has a thick beautiful black/brown coat that has a patch of white on her chest and then has the most adorable white paws. Freyja may be cute and tiny right now but when she is full grown, she will be a medium/large size dog and will have the personality to match her size!

Freyja came to us from Northern Manitoba where she was rescued by Save a Dog Network as she was found roaming alone. Freyja has been to the vet and is in great health and has had everything medically that puppies of her age should have. Adopters will be responsible for the continuation of puppy vaccinations and all other required vet care at their own veterinarian. Adopters must also not have any holidays away planned for months coming up after adoption or be planning to move in the near future. Stability is key in months after an adoption.

Freyja is a very busy girl who is extremely intelligent and has a heart of gold. Freyja loves being loved and will do anything to be the centre of attention. Freyja absolutely loves her people and is always watching what you are doing with a keen interest. She is a very confident and fearless girl, who can be stubborn at times and will require someone who can be consistent and firm with her so she can be her best self! With Freyja being just a puppy she has your typical puppy energy. Freyja is always on the go and looking for the next best thing that can go in her mouth …. nothing is off limits in her mind. Freyja is currently a bit mouthy as she is figuring out her puppy teeth, but she can be redirected with a toy. Freyja loves toys of all kind and is happy to chew on whatever toy is provided to her. She loves to chase balls but is still learning how to bring it back. After Freyja has gotten out all of her energy she is happy to snuggle up on the couch with her people for a good snooze. 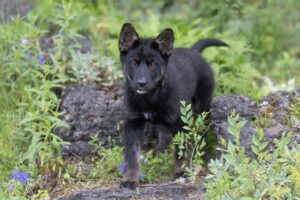 But don’t be fooled, after she has had her snooze she is raring to go again! Currently Freyja is fairly good in the house but as Freyja is just a puppy she requires very frequent bathroom breaks and is let out after she naps, eats or has finished playing. Freyja is looking for a family that believes they can take on the energy and commitment of a puppy. Freyja is an extremely sweet girl who deserves nothing but love and happiness but when she is out and about in the house, she is busy and needs to be watched constantly!

Freyja is crate trained and is in her crate for all her meal, at night, on car rides and anytime she is left home alone. Freyja will happily enter her crate when it is meal time and for the most part is fairly quiet in her crate. On occasion Freyja will use her little voice to let you know that she is still in her crate and would like to come out and enjoy some fun. It will be very important for Freyja’s forever family to continue with her daily crate training to ensure that she continues to feel confident when left alone. Freyja has spent 3 hours in her crate alone during the day and there were no issues. Although she has never had an accident in the crate, Freyja is still let out in the middle of the night for a bathroom break. We will require Freyja’s forever family to have someone home frequently as she is currently fed 3 times a day and has a small puppy bladder and cannot go a full work day without being let out. 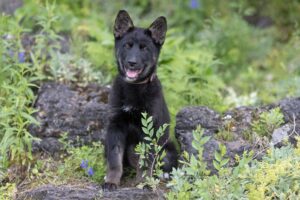 Freyja absolutely loves being outside and being able to explore new smells. When outside Freyja loves to play around in the grass, chase or chew on a toy, people watch or wrestle with her foster brother and annoy her older foster brother and sister. She also loves to visit the goats and chickens and sit by the fence and watch them. While outside Freyja needs to be watched very closely as she is true to the Husky breed and absolutely loves to dig and is always quite proud of her work. For this reason, Freyja requires a safely secured fenced in yard. Freyja has just recently been introduced to the concept of walking on a leash and she seems to enjoy going for a short walk. Freyja’s forever family will need to be people who are active and are familiar with the Husky breed. Freyja will not be your couch potato type of girl but will be the perfect dog to take on all your adventures. Freyja will require a lot of physical and mental activities to make sure her needs are met and to keep her out of trouble.

Freyja currently lives with 3 other dogs and really enjoys having friends around. Freyja would be good in a home with another dog but would also be happy to be the only dog so she can get all of the attention. Freyja likes to be the queen of the house and there is only room for one queen in every home. For this reason, if there is another dog in the home, we require her to go to a home with a male dog who would enjoy play. Freyja also lives with a cat who is used to dogs and foster dogs so she is learning to keep her distance but sometimes her need for play gets the better of her and she goes too close and ends up getting swatted. She would be fine in a home with a dog savvy cat as she will grow up with it. She has not been around kids but would 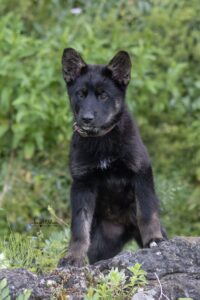 be suitable for a home with kids 10yrs or older.

Freyja is extremely smart and has mastered sit and is working on down. Freyja would greatly benefit from attending puppy school as well as working on some advance level training. Freyja has a vocal side to her that typically come out when she is playing or when she disagrees with something you have said such as chewing on the couch if off limits. Due to her vocal side she would be best suited in a detached home.

Freyja is a sweet, loyal, silly, intelligent girl who is full of energy and never misses an opportunity to let you know how happy she is to see you. Freyja is on the hunt for the perfect family who is committed to working with her to be the best dog that she can be. Are you ready to welcome this cutie into your home?