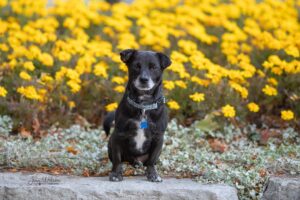 I am very pleased to introduce Gill. He is a 10-year-old Jack Russell mix. Gill is approximately 18 pounds and fits nicely into the category of small dogs. Gill is the perfect size for any living situation as he is small enough to live comfortably in an apartment but strong enough to take on hikes and runs in the country. Gill is mostly black but is grey in all the right places! He has an adorable little grey snout and a nice grey marking down his belly. His coat is beautiful and Gill loves to have a daily brushing and is also up for an at-home bath. Gill is truly a mixed bag when it comes to his breed, from what I have noticed he has the Jack Russell chest and demands attention with his typical Jack Russell strut. But Gill also has sweet and soft almost hound dog type eyes and to top it all off, Gill features the most adorable little curl in his tail which really goes with his sassy personality. Maybe a bit of Pug in there?? Gill is a dog who is both handsome and adorable, and his personality matches this perfectly.

Gill was named after the Finding Nemo character; you know the old man who just won’t give up and will do anything to help his friend out? That is exactly Gill. While I’m sure Gill has some scars on his past, this really does not affect his gumption and drive to live up to the duties of being man’s best friend. Gill has so much drive to please, and this shows in his ability to pick up training quickly, as well as his cuddly and snuggly personality. Gill was left tied up at a trailer park with one another dog. After being taken to the pound, I was lucky enough to scoop this guy up and give him a loving foster home for the interim.

Gill clearly had some training in his previous home, as when he arrived in my home, he knew some basic commands such as “sit”, “down”, and “stay”. He also only had one accident at my home, and only one accident when I brought him to my parents. I believe this was a marking trick and not a housetraining issue so just ensure you keep an eye on him during the first day or so of being somewhere new. Gill will go to the bathroom in a backyard or on a walk, and only requires about three 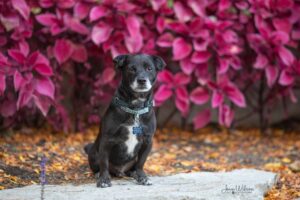 or four bathroom breaks a day. Gill is a pretty moderate energy dog and has been doing well with two walks a day at about 40 minutes each. Gill has walked in the busy city setting at my parents’ house as well as hit some trails with me and he really loves both. Gill maxes out on his walks after about an hour and will really start to slow down, so given his age its best to keep them just under an hour. With those two walks, Gill is more than happy to sleep quietly beside my desk while I work or to snuggle with me on the couch. He really, really loves it if you rub just underneath of his mouth, he will stick his snout in the air and close his eyes for a while before flipping onto his back for a belly rub. Gill has not figured out how to play just yet, but I think with some more coaxing there might be a little puppy play left in there. Gill does not bark in the home at all, and he doesn’t bark when I leave him in his crate or when I return. Gill is fully crate trained and will sleep in his crate at night or stay in it while you’re away with no issue. Gill will be your new best part about coming home. He is always ready to greet you at the door and acts as if you have been gone for months! The best is hearing the “thump, thump” of his tail hitting each side of his crate as you walk in the front door.

Gill would do well in really any type of home. He lives with me in an apartment and is happy to ride the elevator, even learning how to sit and wait for the elevator and to sit while we are inside. Gill also enjoys the backyard at my parents’ house and having some time to roam and is very sufficient on the stairs. It is important to keep an eye on Gill while he is outside and to ensure that the backyard is very secure as that nose of his would be bound to run off if it caught a scent it really wanted. Gill is great in the car and is happy to go with me wherever I am headed. I call him my little shadow. He will hop right up into the back seat and sleep for the whole ride, whether it be a short trip to our grocery store pick-up or the trek back to my parents in Toronto. Gill does require an owner who is 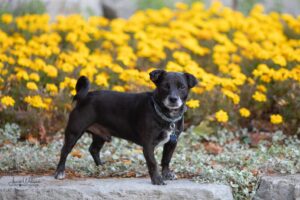 willing to be diligent with training (especially on his walks) since Gill can exhibit some behaviour such as excessive marking which slows down a walk a lot. Gill understands that this is not allowed when he is walking, but it is important to keep on top of these behaviours so that Gill knows that he isn’t running the show and you actually get a good walk in. He is super simple to train and understands ques very quickly. Because Gill is an older dog, I would also recommend that if he goes into a home with children that they be over the age of 12. Gill would love the attention of a family who is able to respect his desire to just chill and be pet for hours on end. Gill is not always keen to play or be bugged when he is snoozing, so it is best that he has a quieter and more laid-back home. Gill would prefer to be the only four-legged friend in his home and can sometimes be reactionary to other dogs, so it is best that he is the only dog in the home.

Gill got a very good report at the vet, boasting a healthy body other than some allergies. Gill got an allergy shot and some ointment and seems to be doing really well on that. It is important that his new home be willing to manage his allergies so that he can live a comfortable and itch-free life.

It is most important to me that whatever home Gill goes too will be his forever home. He is so 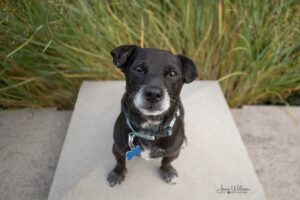 loving and loyal that he really does deserve it. Gill has been such an amazing addition to my life, and I know he will be the same to whoever is lucky enough to be his match. Gill absolutely loves meeting new people, and from what I have seen with acclimate to his new family very quickly. Gill fills the room with love and affection, and there is no denying his adorable presence. Gill has been a real stress-reliever to me while I’ve been tackling a busy online school semester and having Gill to snuggle with or reach down and pat whenever I’m feeling overwhelmed is such a comfort. I know Gill with fit right in to his new home and make his new parents as happy and fulfilled as I am.