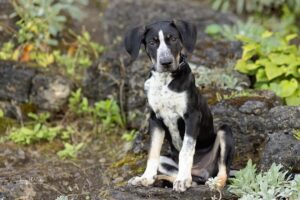 Introducing Groot, a dog who is the definition of a faithful companion.  Groot is a 4.5-month-old mixed breed who was found with his two siblings in an abandoned residence.  We believe that he is a mix of mastiff/cane Corso, lab, german shepherd, and a hound.  Essentially, he’s a bit of a lot of things.  Whatever his mix, we believe that he is a pure-bred good boy.  Groot was taken in by a shelter and eventually came into the care of Pound Dog Rescue.  We feel lucky to have Groot because he truly has the best personality.

Groot is a larger breed dog and will grow to be a powerful boy.  It was important to us that he be placed into a foster family so that he could be introduced to as many life experiences as possible and be provided with the necessary socialization and training to make him into a great family dog.  Groot is currently being fostered with his sister, Supernova (Nova).

Groot and his siblings will be adopted separately, to different families, so that they can each reach their own potential independent from one another.

Groot is the largest of his siblings and currently weighs approximately 30lbs.  We suspect that when fully grown, he will weigh at least 80lbs or more.  We are looking for a family that has large breed experience and knows how to meet the training and socialization needs of a dog this size.  Groot is mostly black in colour with very short, incredibly soft, and shiny fur.  His front paws are white and look they have been splattered with tan and black paint.  He has a white stripe that runs down his snout between his eyes.  He was very thin when he came into our care and we have been working to help him gain some weight. 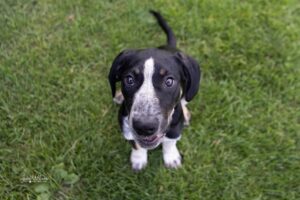 Groot is a sweet and gentle soul who has a calm demeanor for a puppy his age.  He tends to take most things in stride.  Groot loves to be with his people.  His favourite pass time is lying in your lap and getting pets.  We don’t think that this will change as he grows bigger so the family that gets Groot is going to need to be prepared for a large lap dog.

Despite his calm demeanor, Groot needs regular exercise in order to keep him happy and balanced.  Currently, he is taken on leash walks in the morning and the evening and he spends much of his day running around the yard.  When we walk, it is with three dogs and he follows along with the pack without any issues.  Groot walks very well on his leash.  We use a gentle leader and he is happy to stay at our side and cruise along beside us.  Groot is not an athlete.  He likes regular walks, and he is happy to walk for long distances with us, but he would rather not run if it can be avoided.  On rare occasions where we have asked Groot to run, he has splooted on his stomach with his back legs splayed behind him and his head between his front paws.  The look that he gives us makes it clear that he would rather be chilling beside you on the couch.

Groot loves being outside.  When we call him in, he gives us a hang-dog look and saunters past us looking deflated.  Groot would do well with a family with a large, fenced-in yard or someone who likes to be outdoors a lot.  He would not be well suited to condo/apartment living.  He is a curious boy and is excited by new things.  Groot’s favorite pastime is chasing things that jump out of the grass in front of him.  He wanders in the field looking down and smelling the ground until a grasshopper or butterfy pops out.  Groot jumps after behind them, trying to catch them with his front paws. 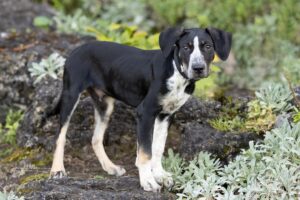 Groot has been groomed multiple times in our care.  He is calm when we bathe him and seems to particularly enjoy being wrapped in a towel and snuggled afterward.  He is not keen on having his nails trimmed.  He tries to hide behind the furniture when he sees the nail clippers come out and then he cries like a baby when you are cutting his nails.  Despite his drama, Groot eventually allows us to cut his nails.  He’s not very tough for a big dog.  He appreciates the many treats that he gets at the end of his ordeal and with time, we suspect he’ll start to get over his nail-cutting phobia.

Groot is being fostered with two kids, ages 10 and 12.  He is handled by them constantly and seems to truly enjoy them.  When the kids wake up in the morning, Groot is all tail wags and happy when he sees them.  Because he is a puppy, there are occasions when he uses his mouth when trying to play with them.  He is quick to respond to correction and stops when told.  We have found that so far, Groot uses his mouth less frequently than many puppies.  He is such a gentle giant.  Groot spends a good part of his day playing with the kids outside and hanging out in their forts with them at the cottage.  He would do very well in a family with children over the age of 7yrs.

Groot is being fostered with an older, large breed dog and he is learning to respect her boundaries.  He looks to her for direction and when he is too rough, she lets him know it and he backs off and behaves submissively.  Groot would do well with a young, playful dog in his new home.  He would also do well on his own, where he could monopolize all of his people’s love.

Groot is being fostered with two dog-savvy cats and he is fascinated by them.  He shows a lot of interest in them and sometimes barks at them playfully when they come around him.   If they were to run, Groot would chase them.  He has been very gentle with the cats so far.  Due to his size and his excitement level around cats, Groot would need to be closely supervised around any cats that he comes into contact with until she learns how to behave around them. 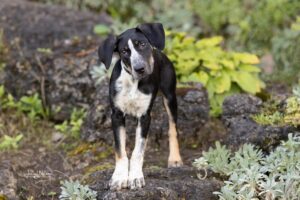 Groot has a very healthy appetite.  He eats twice a day and tends to consume his food very quickly.   We have found that using a slow feeder dog bowl has been very helpful.  It appears that he is the largest of his litter mates for a reason.  Groot has not shown any food aggression whatsoever.

Groot is crate trained.  He took to the crate with very few issues and is calm and quiet when we put him in it. Groot sleeps in his crate at night and for parts of the day when we are not able to supervise him.  Groot sleeps well at night, however, we do wake up with him once because he is still young and has a growing bladder.

Groot has been on many road trips in the car.  He travels in his crate and is generally quiet.  Currently, Groot does get car sick quite easily.  This is something that is common in puppies his age and he may grow out of it.

Groot is still quite young and he is learning to go to the bathroom outside.  His potty training is coming along nicely.  He has started to whine when he needs to go outside.  He tends to use the same spot in the backyard to do his business.  Groot has learned to go to the bathroom on command with “Groot, Go potty.”  He is a smart boy and very receptive to treats and positive reinforcement.  Groot very quickly learned his name.  He picked up on the “sit” and “touch” commands.  He is highly trainable.

Groot has proven himself to be an excellent, kind-natured puppy.  He is an absolute suck who wants belly rubs and ear petting 100% of the time.  He just wants to make his people happy and he wants to be by your side.  If you are looking for a giant fur baby to cuddle with, Groot may be your next family member.