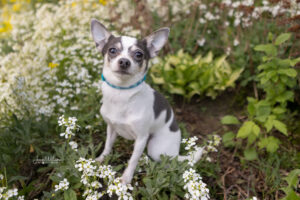 If you are a fan of the ‘littles’, get ready to meet one of the most wonderful littles there ever was. Folks, meet Marty McFly (aka Marty). Marty is a male Chihuahua that is approximately 2 years old, weighs 4.5lbs, has a gorgeous blue and white coat and the most endearing, comical, affectionate personality…and of course, he is super handsome! If you are looking for your partner in crime in a wee body, keep on reading because Marty is about to steal your heart.

Marty came to us from a pound in Quebec where he found himself without a family and was overwhelmed by the environment. See Marty is a sensitive sort of guy and he was feeling very lost, very confused and he was not handling it well. We saw him and knew we could help so Marty made his way to us and our foster program. It was clear within a day, that he was a special sort of little guy and his foster Mom describes him as the ‘perfect’ Chihuahua; sweet, smart, brave, affectionate, devoted, playful, resilient and social with people and dogs with just the right amount of sass. He plays a little shy sometimes, but he comes around very quickly and above all things, just wants to be with his person and going on adventures. As long as he is by your side, he is happy. However, it should be noted that should you be the lucky family to bring him home, you are never going to the bathroom alone…ever again…literally. In Marty’s eyes, that is the perfect time to trap you into a cuddle session!

In the house, Marty is very quiet. He has only barked once or twice during play, but he has a robust vocabulary consisting of whimpers, whines and sometimes a little howl to let you know exactly what is on his mind. He also has perfected his ‘Marty stare’ which all indicators point to some Jedi mind tricks he plays on you to get his needs and wants met…I mean, it is hard to refuse him! That being said, he is super smart and knows how to manipulate the weak links, so make sure you have boundaries and expectations in place, or he will have you convinced you are working for him as a member of his unpaid staff. Marty has not been destructive in the home, is crate trained, sleeps in it at night and whenever left alone and he keeps it clean. He is housetrained and once he learns your routine and the doors he needs to go out of, he will run to the door to let you know it’s time to go do his business. Marty lives with a few dogs and does very well with all of them. He likes to chase, wrestle a little and cuddle. As small as he is, he can hold his own and assert himself if things are getting out of hand, but due to his size and 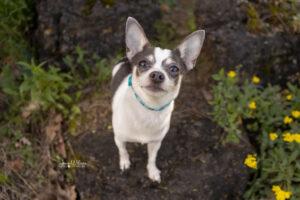 dainty bone structure, he would be best suited to living with smaller, gentler dogs to prevent unintentional injury during rough play. He has not been tested with cats, but is likely ok with a kind, dog savvy cat that won’t bully him but also won’t allow themselves to be bullied. As for children, given his small delicate size he will be best suited to a home with children 10 and up who understand he shouldn’t be rough housed, carried around in case he is dropped and know to be calm and respectful with him.

Marty loves car rides and will ride in a booster seat and if he had his way, would be on your lap. He loves looking out the window and seeing the world go by. When out in new settings, he can be a little shy at times as it appears he may not have had a lot of exposure to new people and places, so it’s important people let him warm up to them and not try smother him with attention at first. He isn’t snappy or growly at all, you can just see him shrink back a little when people are too boisterous or assume they can just reach out and touch him, so he needs you to be his advocate and create space so he can check people out first. He is so gentle and sweet and the vet team rather enjoyed him; he handled the vet appointments like a pro! He can have his entire body handled, nails trimmed, and a bath given without much of a fuss. Again, he shows no snappiness or growling, he might just try to squirm out of the tub if given the chance.

Marty also loves his walks and is getting much better at walking in a straight line because boy, he had no concept of that when he came to us! He covered as much ground exploring as possible, which meant he was a tripping hazard if you were not paying attention. He is a very quick learner and will do a fabulous job at training class when he goes with his people. Speaking of training, as previously mentioned Marty is a sensitive guy so training should be done with consistency, high expectations and a lot of kindness. He is not a dog to be spoken to with raised voices or rough handling, it will just cause him to shut down. He is also quite athletic and brave and is not a couch potato kind of guy, he could absolutely do fun agility one day! Of course, he can spend time on the couch watching a movie for sure, but he likes his activity and adventures, and he needs his family to provide him those regular outlets of joy. He is a happy boy and there is so much life to live, and Marty is here for it all! He makes his foster 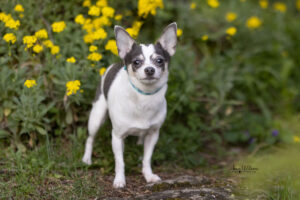 Mom laugh every day with his unique quirks…like how he leaps over thresholds instead of walking over them; how he leaps onto carpets instead of stepping on them; how she will turn around and find him sitting in the large potted plant behind her, starting at the back of her head willing her to see him….the list of his antics can go on. Just know it’s really hard to have a bad day with Marty around because he is guaranteed to do something to make you laugh and shake your head at him. And when training and play are done, he wants nothing more than to curl up with you, often on your chest, tucked under your chin, where he can be as close to you as he can. Above all things, he is devoted to his person, and he loves hard with that huge heart of his. It should be known though, that as much as he loves his person and their attention, Marty has worked on some confidence and independence and can often be found curled up somewhere on his own for some quiet time. He could be prone to separation anxiety if his family does not give him regular opportunities to have some quiet alone time…the good news is a stuffed Kong in the crate daily while his family goes to work or about their day is a great way for him to continue to enjoy being independent. Marty would very much appreciate a home where someone can let him out during the day if they leave the home for work, and he would LOVE a secured outdoor space that he can explore and lounge around in on a beautiful day. One of his new favourite past times is to crawl up onto the patio couch and bask in the sun and cool breeze, whether you are right beside him or not…to him, that is bliss!

Marty has tested positive for Lyme but is asymptomatic and requires no treatment at this time. 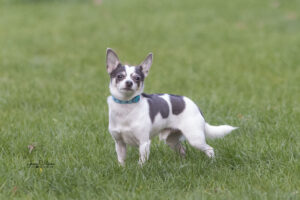 Many dogs that are infected with Lyme never do show symptoms, but his future family should be aware that he will always test positive and may at some point require attention from the vet for it. The wee lad is a healthy young guy but he can sometimes have a sensitive tummy so care should be taken to not switch foods too quickly on him or load him up with too much of a variety of treats at any one time. But other than that, he is sound and strong and ready to take on the world. Now all he needs is to find his forever person…the one who will never let him down again, the one who will show him what this great big world has to offer, the one who will take care of his tender heart. If you think that’s you, Marty is currently interviewing for the position!