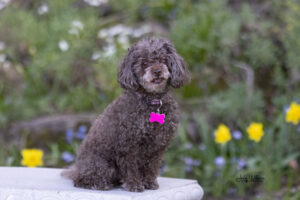 Hello everyone! I am so excited to introduce you to Mindy! Mindy is an 11 year old toy poodle who weighs about 9 pounds. Mindy has the cutest little chocolate curls all over her body and loves to be brushed and get head pets. Mindy is greying in the muzzle area and has a few lumps and bumps, but beyond a few physical tells you would never know that Mindy is a senior dog! Mindy is incredibly spirited and sprightly for her age! Or for any age actually! If you are looking for a very low-key senior dog who just wants to sleep all day, Mindy is not your gal! Mindy is alert, bright, and a ton of fun. She makes us laugh every single day with her goofy antics and sheer love of playing and zooming around the house. Though Mindy loves play and learning, she does settle well and loves to snuggle on the couch with her foster family. Mindy is the perfect example of the fact that age is just a number and you are only as old as you feel!

Mindy has great energy but she will also match your mood. If you’re up and about doing things, she’s up and about doing things. Cleaning the linens? She will jump on them! Making dinner? She’ll be your sous-chef! If you want to sit on the couch and watch tv for 3 hours? Sure, she’s down for that too! Mindy is just interested in being your best friend and having great times together! She’s an “enjoy every moment” kind of girl and doesn’t really mind what life brings as long as she’s got her best friend by her side!

For Mindy’s first 11 years of life she belonged to one person and was well loved. Unfortunately when her elderly owner could no longer care for her she ended up in a pound in Quebec. Of course a pound is no place for a sweet and loving little lady so Pound Dog Rescue got her into a foster home while she waits for her forever family! Mindy has been a wonderful source of joy and cuddles for her fosters but she is ready to find her permanent home!

Mindy LOVES belly rubs! Sometimes I look over at Mindy and she’s just laying down staring at me, once she gets eye contact she will flop on her side and lift her leg up to say “pet me please!”. Mindy loves affection and quickly finds the lap of visitors in our home so that they can give her the attention she deserves!

Mindy’s ideal home would be interested in training and playing! As I mentioned Mindy might be 11 but 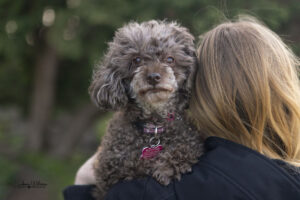 she’s still full of life. Mindy takes the stairs with such speed that though it makes me nervous, I think she’d love to do some agility work as a bonding experience with her adopter! Mindy loves to play. Fetch, tug, chase you name it she likes to play it. She would love her forever person to continue to work with her and give her the mental and physical engagement opportunities that she enjoys so much.

Mindy is incredibly smart and eager to please! She’s especially eager to please if you have treats in your hands! As I mentioned Mindy is from Quebec and at this time she only knows her commands in French. With practice she would definitely be able to learn the English equivalents as well, we have found it’s easiest for us to start with the French words. Her favourite trick is “sit pretty” or “asseoir joli”. She is very good at sit and come as well! Mindy would love to continue to learn tricks and would love an adopter that continues to work her brain.

Mindy does love walks but she is still learning not to pull on leash. The world is SO exciting so it’s hard for her to take it at a slower pace! She would like to meet every person and do it as fast as possible! With practice Mindy will able to enjoy her walks more by learning to slow down and smell the roses (or just the ground). Mindy LOVES our fenced backyard as she loves going out and chasing the squirrels and the birds. A fully fenced yard is a plus but not required. Mindy would also be fine with a yard that isn’t fully fenced so long as she had a long line so she can have some outdoor time without feeling like she has to go somewhere.

Mindy is great in the car and loves to hop into the passenger seat and look out the window as she travels.

When Mindy first came to us she had only been trained to go on pee pads and had a few accidents in the house, but she realized incredibly quickly that we expected her to do her business outside. She now will signal quite clearly by doing her signature Mindy “drop kick” and running to the door to show you she has to go! She learned this whole process faster than any foster we’ve had and clearly communicates her needs.

On the note of Mindy being a very clear communicator. She’s an expert in self expression. Mindy will bark to let you know there are people outside, that someone is at the door, and when she is left alone. As Mindy is quite a vocal little lady she would do best in a detached home. She would not be suitable for an apartment as she would be serenading your neighbours a little too often as they come and go. Though she is a bit barky she does settle quietly and if she cannot see or hear people passing by the house she does not bark about it at all! 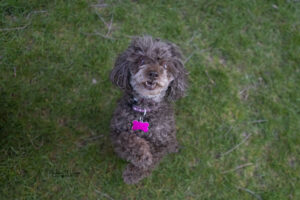 Mindy has lived with other foster dogs while in our care and she has been great with them. That being said she can be a bit “in your face” at times with the other dogs. She would likely love another small – medium sized dog sibling who wouldn’t mind playing with her and keeping her company! She could also be very happy without one as long as she had human company. Mindy has not been cat tested and it is difficult to say how she would feel about a cat. She likely could be fine with a dog savvy cat but she does like to chase animals in our backyard so a cat that runs from her would immediately turn into a game and I’m sure your cat would not appreciate it!

Mindy does not love being grabbed at or having fingers in her face. I went to trim her bangs one day and she huffed and let me know that she likes them how they are thank you very much! Mindy has this adorable habit of “helping” when you go to pick her up by jumping at the same time you lift. She likes being carried and cuddled but not surprisingly she doesn’t appreciate just being grabbed without warning. Mindy would only be suitable for a family where everyone is at least 14 years of age and that understand that though she is small she needs to be given bodily autonomy and treated with respect.

Mindy is a love bug and does not like being all alone. Given the fact had lived her whole life with someone who was home the vast majority of the time, it makes sense she doesn’t love being left alone. When we leave the house she lets us know how unhappy she is about it by barking and whining when alone. She can be crated for a few hours at a time but we know from our Furbo camera that she can bark for an hour before settling in her crate for a nap. Mindy would do best with someone who wants a work from home buddy, or has alternating schedules so she’s only home alone a minimum amount of hours per day. The standard 8 hour work day plus commute would be too long for this little lady to be along, and in her golden years we think she deserves to have all the company she needs!

Being a bit older Mindy had a bit of vetting to be looked after when she came into Pound Dogs care. 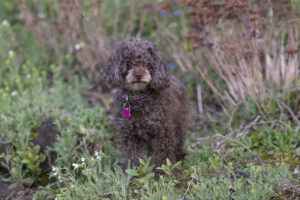 Mindy had a full dental cleaning with a few extractions, but she has almost a full mouth of teeth which is fantastic considering she’s a senior small dog. Mindy has a few lumps that have been checked by the vet and are just fatty deposits! Overall the mighty Mindy is in wonderful shape and has a lot of life left in her!

Mindy is an incredibly smart dog who is a total goofball and joy to be around. She is full of love and affection and is so enjoyable to be around. We’ve truly enjoyed our time with Mindy and cannot wait for her to light up someone’s world with her cheerful attitude and energetic vibes! From snuggling to playing Mindy is up for it and ready to find her forever home and best friend to take on the world with!