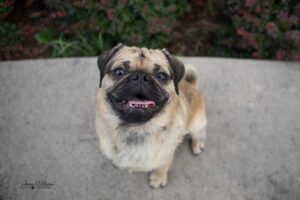 This adorable little guy with the huge personality is OG. He is a 2 year old Pug/ ShihTzu mix who weighs 15lbs. OG takes after the Pug look with his fawn coat and black face mask. His coat is a bit longer than a true Pug and he does have some shedding, however it is easily controlled with brushing which OG loves to have done. OG’s personality also follows the Pug breed as he is such a happy, affectionate, loyal and mischievous little guy. He also likes to show us his stubborn side at times too, as Pugs are known to do. OG has been such a complete joy to foster and his quirky behaviour manages to make us laugh at him on a daily basis.

OG was rescued from a home where the dog owners became overwhelmed with the number of dogs and puppies. There’s no reason to believe that he was abused or wasn’t loved.  His health care just wasn’t kept up and he had eye issues that were never addressed. We noticed upon intake into rescue that OG had cloudy eyes. The vet specialist figures he suffered from dry eye that caused an ulcer or pigment cells to migrate across his cornea.  We have had OG examined by our regular vet and also took him to an Animal Eye Clinic to be examined by a specialist.  The good news is that OG does not require surgery and his condition should improve but will never go away entirely.  It affects his vision somewhat but he manages quite well, aside from long flights of stairs.  The bad news is that OG needs to be on 2 types of eye medications for life.  He is good at getting his drops, as treats are involved.  But this is something that his new family needs to understand MUST be kept up as failure to do so will result in his eyes worsening.  We are seeing improvements since starting the drops which is great, but his new family needs to be able to afford the cost of his drops….one of them costs about $110 for 4 to 5 weeks and the other is about $20 for 5 to 6 weeks. We understand that not everyone will want to take this on, but we also know, OG is such a special boy and such a love, that there will be a super special person or family out there that will want him, drops and all!

OG comes from a very large pack of similar dogs and appears to be very compatible with other canine companions. OG is currently being fostered in a home with one younger, medium sized dog and an older, larger dog, and he LOVES them both! OG constantly wants to be with one or both dogs and very quickly learned the routines and rules from them. He likes to get his older foster sister playing with him by jumping near her and letting out a strange version of a bark towards her. OG and his foster brother are constantly playing games of chase as well as tug of war with each other. OG is quite a quick little guy and he does not let the fact that he is smaller stop him from trying to keep up in a game of chase. He loves to prance around with his head up high and a toy or rope in his mouth if he wins the round of tug of war. It actually looks like he is quite proud of himself for winning the game and is showing off the toy he earned. OG would ideally like a home where there is another playful dog as he loves his foster siblings so much. 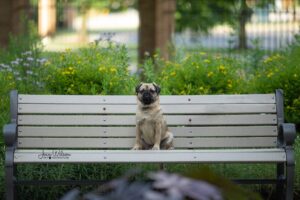 We would consider a home without another dog only if OG would have regular play dates with a known dog friends (no dog parks please).  OG loves to play with toys with his humans and by himself as well and will often be seen and heard chasing a ball or some other toy around the room. OG’s pre-rescue home also had multiple cats; however, he has not been tested with animals other than dogs since he came into foster care.

OG loves being around his foster family. He enjoys playing with, cuddling and just being near his humans. OG will follow one of his foster family members from room to room just checking in to make sure he is not alone. He is good with meeting new people, although he likes to take his time getting to know them. Once comfortable though, he will show his great personality with his new friends. OG is really happy to sleep in his crate at night time, but only if his crate is in the bedroom, as he wants to be in the same room as you. He is a good sleeper and will only get up when he hears his humans are awake, although he does like to snore during the night. OG is working on being okay in his crate while his humans are out during the day, but so far is only okay with this concept in small doses as this is stressful for him. He will do best in a home where someone is home most of the time, as being alone is not something he has ever known and doesn’t understand. OG would be best suited for a detached home, where barking noises while crated won’t bother neighbours. A home where someone is home most of the day, even post COVID, is our goal for OG. 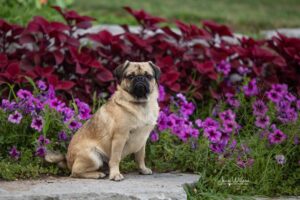 Walks were a new thing for OG when we first got him, however he quickly learned how much fun they are and he now loves going out for walks. OG is walked with a harness and he is quite a good walker. He likes to walk with something in his mouth and will often scoop up a stick, leaf, pine cone or even his leash to carry with him. Walks have really helped OG with his house training and he has had limited accidents in the house since we have been fostering him. We do make sure to let him out or walk him often during the day to avoid accidents.  OG gets 2 to 4 walks per day in his foster home depending on the heat (he can’t handle the heat well).  OG has met many dogs on our walks and made some new dog friends to play with as well. He has also met quite a few kids and seems to be okay with them as long as they are older and calm when meeting him. For this reason, OG should only go to a home with children 8 years and older who know how to behave appropriately around a small dog. He startles easily with quick movements or loud noises or excitement so won’t be ideal for a home with many kids or young children.

OG has had a lot of new experiences since being with us and has responded really well. He enjoys car rides and usually sits contentedly with a few toys to chew on for the duration of the ride. OG has been learning some new commands and will now sit patiently for a treat as well as for his meals. He is learning the words stay, come and walk and responds really well to treats as a reward. Continued training with OG will benefit him in the future. He enjoys exploring in our yard and will get the zoomies and run around the yard a couple times a day. For this reason, a fenced yard would be ideal for him. OG would do best in a home without a long flight of stairs as he has a hard time gauging them due to his eye issues. He has proven to 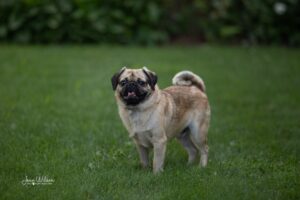 have a love of any kind of footwear left lying around and he continually picks up a shoe, slipper or sandal to carry back with him to his dog bed. Once there he will play with his find but does not do any damage to the foot wear, although he really seems to enjoy pulling the laces out of running shoes. OG is a quiet dog who will only bark when he is playing with his foster people or dogs and that is done in a playful manner. He sometimes makes some strange sounds when playing by himself with toys too.

We have been so fortunate to have been able to foster this fantastic dog. OG is such an entertaining and comical boy who is so devoted to his people and will love and totally adore his forever family. We will miss his unique sounds and quirky behaviours as well as his cuddle and snuggle times. He will be a wonderful addition to his forever home.