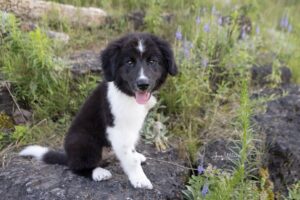 Patterson is a Border Collie X who was born on April 11th 2022 to a puppy mill breeder that was unable to sell him because he was born with a deformed left, front leg.  He was surrendered to a rescue who took him to prevent him from being euthanized and Pound Dog Rescue was asked to take over his care as he was going to need surgery on the leg.  Boy are we glad that we did because this little pup has stolen our hearts with his sweet personality and desire to please his people.  Patterson is mostly black in colour with a white ring of fur around his neck and a small white dot on his back.  His fur is medium length and extremely soft.  He is a medium sized dog that currently weighs about 15 lbs.  he should grow to weigh about 45lbs.

Patterson had specialist surgery where his deformed leg was removed to allow him better stability as it was only getting in the way of his pursuits. He has recovered beautifully from his surgery and is ready to find his forever home.

The thought that anyone could consider putting Patterson down is unthinkable to us because his missing leg does not slow him down.  There is nothing that this resilient little pup won’t find a way to do.  He sprints up and down the stairs; he climbs anything that gets in his way.  He traverses the rocky shores at the cottage with ease.  Patterson loves to play in the water and jump in the waves.  The only obstacle that Patterson has yet to manage has been swimming.  Although given time and a proper life jacket, we suspect that he will figure out how to master this skill as well.

Patterson is smart.  Very smart.  He has responded well to training and can be motivated with both food and positive reinforcement/affection.  Patterson was only 7 weeks old when he left his mother and he is still very much a puppy.  If there is something for him to get into that he should not get into, he will find a way.  His new owners will need to puppy proof his surroundings and watch him closely to make sure that he stays safe.  Patterson likes to stay close to his people and keeps a watchful eye on them wherever possible.   He needs an experienced owner with the confidence to provide direction to him and to show him how he should behave.  Patterson is a working breed and needs A LOT of exercise every day to keep him out of trouble.  He would do best with people who have experience with high energy, working dogs.  Patterson is very intelligent and wants to please his people.  He has the potential to be an outstanding family dog if his forever family puts the time and energy into exercising and training him now and throughout his life.

Patterson is relaxed when walking on a leash and does not pull but then again he is a puppy. He needs to 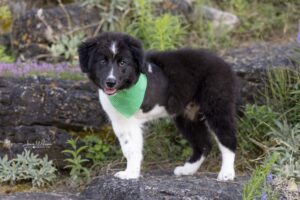 be trained to keep walking properly on leash when he gets older and starts to test the limits.  With all of his dark fur, he gets hot quickly so he prefers to walk early in the morning or later at night.  During the heat of day, he shuffles between the shade spots trying to avoid the direct sun.  If he gets too hot, he tends to stop walking.

Patterson is being fostered with two children, ages 10 and 12.  He has been exposed to children of all ages and he hasn’t met a child that he doesn’t like.  He is learning not to jump up on them when he gets excited and we have been diligent about having the children stop playing with him immediately if he tries to use his teeth on them. Because he is a puppy with very sharp teeth a home with children 10 and above is needed for him. He is just too easily over excited around younger children and then the teeth and jumping become a problem. But for older children and an experienced adult(s) who will supervise interactions he will be a great family dog.  When Patterson is tired, he can often be found sleeping on the lap of one of the children like a rag doll.

When Patterson doesn’t have a lap to sleep on he looks for a nook to sleep in.  Any cave-like space will do.  Under furniture, between the wall and a couch or in any fort that the kids build for him.

Patterson is being fostered with two dog savvy cats.  He has been known to be too rough with one of them (the one who won’t defend himself) and we feel that he would do better in a home with no cats. Patterson is being fostered with one large, mature dog who he looks at for constant direction.  He loves other dogs and would do well with another young and playful dog.  He would also do well as the only dog in a home where he could get all of his people’s attention to himself.

Patterson is crate trained.  He sleeps in his crate at night and some times during the day when his foster family cannot watch him.  Provided he has been exercised sufficiently, he falls right asleep.  Patterson does need someone to get up with him once during the night to let him outside.  He falls right back asleep when you put him back in his crate. 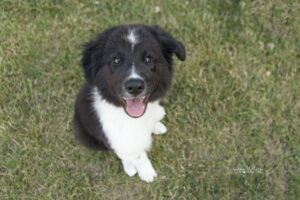 Patterson was doing very well with his house training but this was set back after his surgery due to the medications that he was on making him need to urinate more.  Once his medications have stopped we believe that he will do much better with his house training.  Prior to his surgery, Patterson was moving to the back door to let us know that he needed to go outside.  Of course though as a puppy, he can’t be counted on to let his people know that he needs to go outside and instead needs to be taken out numerous times throughout the day. We will only consider homes for him where someone is home or has the capabilities to come home throughout the day. Puppies need to be taken outside for bathroom breaks very regularly when they are small and will not be able to hold it for an 8hr work day. We are also looking for a family or person that is fully aware of the time commitment of a puppy and the work involved. Puppies are a total joy and bring so much love and happiness into a home, but you cannot underestimate the work and time involved in raising a puppy properly. They need constant supervision while young to expedite the house training stage and to ensure they aren’t chewing on anything inappropriate. We are also looking for a family that will continue his crate training as we fully believe that this is the best for pups and offers them a quiet and secure “den” to call their own. A crate trained pup is a blessing as it offers a safe place to put them when you can’t be watching them all the time.

Patterson currently eats three times a day and has a healthy appetite that supports his activity level.  He eats as if someone has pressed his fast forward button, but he has never shown any food aggression whatsoever.  When he is 4mths of age he can be transitioned to eating twice a day.

Generally, Patterson is a very confident dog that takes things in stride.  He has been introduced to 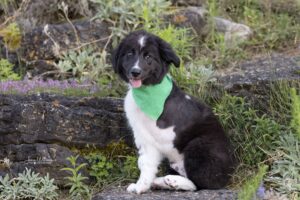 He is very friendly with new people and greets them with tail wags and enthusiasm.  Patterson is certain that all new people are there to see him and to give him love.  He flops down at their feet and expects belly rubs.  When they rub his belly, all three of his legs start to shake and his entire body wiggles with joy.

Paterson is a puppy and as such, he is a lot of work and needs a dedicated family to help him achieve his full potential.  Having said that, it is really hard not to be happy around him.   People are drawn to him wherever his foster family takes him.  Strangers flock to meet him and ask questions about him.   Many people have even asked to take their picture with him.  There is something about Patty’s zest for life and perseverance that draws people to him.  Patterson is a people magnet that brings a smile to the face of everyone that he meets.  He is truly a special dog and we know that there is a family out there waiting just for this special boy.