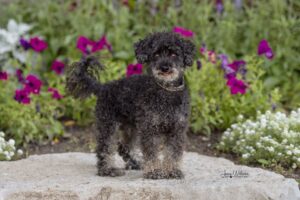 Meet Peppy a sweet, quiet, cuddly teddy bear of a dog. He is a Toy Poodle weighing 6 1/2 lbs and is believed to be approximately 10 years old. Peppy has a dense multi-coloured coat of tightly curled hair. He is basically black with sable coloured paws and butt and is beginning to show signs of greying around his muzzle.

True to his name Peppy will become a ball of energy when you mention the word ‘TOY’. He will shake in anticipation of the excitement to come. He makes play time so very easy as you never have to go out of your way or stretch and reach for the toy. If he doesn’t drop it close enough to you simply say ‘where is it’ and he will pick it up and bring it closer to you. He has energy to spare at playtime. He runs like the dickens and will bring it right back to you. This can go on for long periods of time. This is basically the only time that Peppy barks. Other than that Peppy rarely barks defining this to be a part of his playtime ritual. He seems to think that he has to vocalize his excitement. If you don’t throw it fast enough he will let you know that it’s your turn to pick up the speed. You can tell he’s has enough when he lays down away from you to catch his breath.

Peppy clearly has a bit of retriever instinct in him. He adores the game of fetch.   When playing 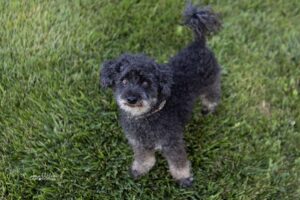 fetch should the item become lodged he will paw, muzzle and work to get it out. If unsuccessful he will come and tell you leading you to the place where it is lodged.   He is so smart and easily communicates his needs or wants.

Peppy is house trained and has never had an accident inside. He will do his business as soon as his little paws hit the grass outside. If he needs to go out at any period during the day he will lay by the door. At night should he need to relieve himself while crated he will gently whimper. Peppy was not a dog that was used to being crated. Impressively he took to the evening ritual within days with little or no fuss sleeping throughout the night without incident. Gradual short periods of being crated throughout the day made the process less scary for him but he does prefers to rest quietly in one of his many dog beds or on the couch by himself if he can’t be with his humans. Having dog beds in various rooms has proven to do the trick as he does find solace in knowing that his humans are close at hand.

Peppy loves his humans and is a great lap dog but he is not clingy. His security lies in knowing that his humans are close at hand so he is content in any of his dogs beds. That being said Peppy is not a dog who is underfoot and is ever conscious of his humans every move. He is alert and ready to move out of the way of danger for himself as well as his humans. He is not, as some would say, a safety hazard. 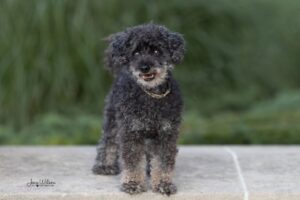 Peppy walks well on a leash. He is aware and cautious of other dogs but is not particularly interested in them. He is stranger friendly and willingly welcomes a gentle under the chin pet. Peppy is content with short, brisk walks during cooler parts of the day as he gets most of his daily exercise at play times in which he demonstrates boundless energy. Peppy is respectful of cats and again pays little or no attention to then either. Peppy would do best as the only dog in the home but could live peacefully with another small senior dog that wouldn’t pester him to play.

Peppy would be best suited to having someone at home for most of the day. His breed is prone to separation anxiety and although he can function inside the home independently he is not the kind of dog that wants to be left behind. In fact he seems to have a six sense as he seems to be able to differentiate between someone who is hanging around home and someone who is planning on going out. But should you have to go out it’s good to know that he is a pick up and go kind of guy. He is a good travel companion in the car and loves to go on car rides with his person. Be warned though that he is a striking little guy who garners lots of attention from everyone who sees him. Be ready to spend a great deal of time catering to endless adulations.

Peppy could do well in a house or apartment living setting. He does not require a lot of daily walking getting most of his needed exercise through playtime. He enjoys hanging out with his humans and will gladly play ball with 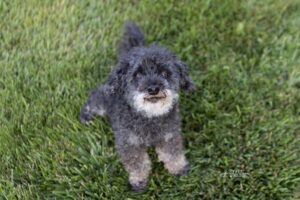 anyone who will indulge including children. He would not like to live in a home with children though. This senior boy would like a quiet, peaceful home without a lot of activity. Respectful visiting older children would be fine as long as he is supervised with them and they interact kindly with him.

Peppy’s breed is known to be playful, loyal, loving, affectionate, responsive, alert and lively. He is all of these and more. He is so easy to love but more importantly this sweet little ball of fur is a peaceful, affectionate, sensitive dog who deserves a peaceful harmonious home. Peppy has been an absolute pleasure to foster and will bring endless joy and companionship to his forever family.