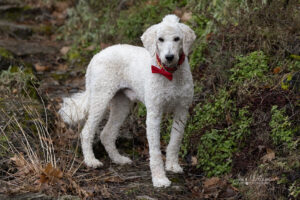 Let me introduce you to Percy! Percy is a large 5 y/o Standard Poodle who is learning everyday all about the joys of being a dog. Percy is roughly 45lbs of pure sweetness, and will surely win the hearts of anyone he meets. His all white coat is non-shedding, super soft and may make you long for your own corkscrew curls. His dark eyes and nose make his face just the sweetest thing to look at. Percy is a handsome dog with a playful personality (once he trusts you) and wonderful temperament.

When Percy first arrived, he looked more like a Rastafarian dog than a Poodle so we started calling him “Dude” but after a much needed visit with Susan at Drumbo Dog Spa he was just so handsome. It was then, that my daughter mentioned the name Percy, and it was a perfect fit!

Percy’s first 5 years were not what any dog should have to deal with. He was originally from Berlin, brought over here to breed doodles at a puppy mill. When the horrible living conditions contributed to Percy no longer “producing” for them, he was just left in a stall, uncared for and unloved. He had very minimal human contact, and what he did have was most likely not the love and affection he is getting now.

Percy has come a long way since we first brought him home. The first 2 days he paced the perimeter of the fence line and refused to come inside. He would sit on the back deck and quietly howl, as though he was calling out to someone. It broke my heart. Luckily, I have a dog who quickly showed him that he was now safe and life was going to get much better.

Percy would do best in a home with another dog. He is still very cautious around humans and gets startled by sudden movements. He is most relaxed when he is with another dog who can show him the ropes.   Im not even sure Ive seen his true personality yet, because he seems to take on the personality of the dog he is around. If they like to sleep all day (like mine) he is content to do that, but when he is around a more playful, energetic dog, he will perk up and try to play. When he goes to visit Grandma he loves to hoard the toys in his (not so secret) hiding spot. Its been a month of so many new experiences for him! 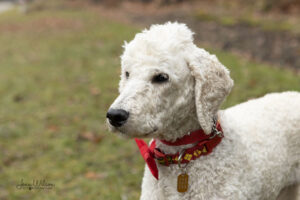 Our house is a pet filled house, where the animals usually get first dibs on the couch. It took Percy a month before he decided to give it a try and now he is a regular. That being said, our house is the only house he is allowed to be on the furniture, and he abides by the rules when we visit grandmas.

I would have to say that Percy’s favourite activity is going on walks. He loves to say hello to EVERY dog he sees by wagging his tail giving them a loud deep bark or 2. The first time I heard him bark, it caught me off guard! He walks very well on a leash, but watch out because he loves to cut you off when you least expect it. He definitely has the typical Poodle prance and loves to do some pirouettes when he is 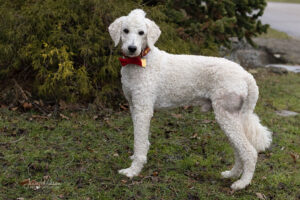 excited. He does not jump up on people (that would require getting too close) and is very gentle when he takes treats. He loves his food, and if he is hungry, he will let you know by going to get his food bin and sliding it to you.

His favourite toys are soft squeaky stuffy’s, but he does need to be monitored with them, because he also likes to eat them. We have been working on teaching him the difference between a pompom on a hat and the dog toys…cant blame him, not a huge difference to a dogs eye! We have also made some at home enrichment toys that Percy excelled at. I know this boy is super smart and once his confidence is built up he will be the best companion.

Percy Loves car rides and is very well behaved. Don’t be surprised if you take him to the Tim Hortons drive thru and he gets excited…good boys get a timbit on car rides.   The only part about car rides that Percy would like to skip is getting in and out. He still has not got the confidence to jump in, and has only jumped out a few times, so you will need to be able to lift him in and out….and he will become deadweight!

Percy has never shown any aggression or really any behaviour towards other animals. He pays no attention to cats, squirrels, rabbits or birds. He will always perk up when there is another dog around. When it comes to small children, Percy seems to trust them the most, after other dogs that is. The only conclusion I can come to is their height and size, but when kids walk up to him, he doesn’t cower away like he does with adults. He won’t enjoy a busy house with young children though to live with. Again, he startles easily and noises scare him. A home with teens though and the occasional visiting child would be fine though. Anyone considering Percy needs to have a quiet and calm home with few visitors and understand that he is going to be shy initially when meeting new people. This will only get better the more he gets exposed to strangers and the world around him. But for a dog who spent 5 yrs not experiencing anything about the world around him he has come so far already. 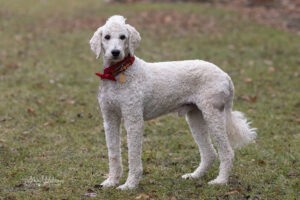 Housetraining was pretty easy with Percy. Within a few days there were no more accidents in the house, and by 1 week he was barking to let us know he needed out. He was great with crate training right from the beginning. In the morning, if he wakes up before you, he will let you know with 1 bark. Should you choose to ignore this bark, well, he will try again a little louder and a little more assertive. We have not mastered “Sit” yet. We have just been trying to gain his confidence but this boy is so smart I know that he will have a whole bag of tricks to show off with in his future.

Percy is a happy, healthy boy who deserves a life full of love, toys, a full belly, head scratches, belly rubs and furry friends. Could your family be the perfect match for this handsome fella?