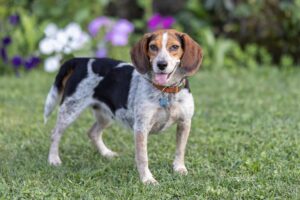 She’s sweet, she’s cute, she’s a Beagle, she’s Pippy the Superdog. Pippy is a 2 year old (approx.) Beagle that was an unclaimed stray at a rural shelter. When I met her she was very shy, very dirty and itchy, missing a bit of fur. Pippy was traumatized by her ordeal at the shelter, and for the first few days would mainly stay in her little doggie bed by the couch. She would very quietly and gently come over to me and touch her head to my leg so that I would pet her. She very much enjoys having her head and ears touched. She howled a bit when I put her in the crate at night, but then settled in and I didn’t hear a peep. Within a few days Pippy was clean, and started to come out of her shell, checking out the house and playing with her box of stuffed toys. I was able to let her loose in the house while I was home and she was pretty good about not getting into things. With regular exercise and proper diet her energy level increased, her fur improved, and her true Beagle self, started to shine. Pippy is a low to medium energy dog. She has her own schedule. Seventy percent of the day, Pippy is very calm and low energy, but when Pippy goes into play mode she is like the cartoon Tasmanian devil, doing zoomies, spinning in tiny circles and pouncing on her toys and throwing them in the air. She does this with such wild abandon that it is quite comical. She loves to go on walks on a long line so she can run about and sniff at things. Her energy level increases with the amount of activity in the house, although she does like long naps in the afternoon. Pippy loves to stretch and roll on the carpet first thing in the morning when she is let out of her crate. After her morning walk, she indulges herself in some playtime with her stuffed squeaky toys. She will pull them one by one out of the box and run around and pounce on them. She will do the same after her evening walk.

So why is Pippy a Superdog. Well Pippy has Super Powers. Pippy’s calm and gentle demeanor gives her the ability to lower blood pressure and stress levels in humans. Even people we have talked to on our walks have commented on how she has a calming effect on them. Pippy not only can calm humans, but she also has the ability to read other dogs and even fear aggressive dogs have been calmed by Pippy to the point where they are able to respectfully do a meet and greet. Pippy is very tolerant of unruly puppies and very diplomatic when meeting other dogs. Pippy has also been introduced to chickens, horses and cats and is not reactive. She will sniff at cats and then go on her merry way. If she is chased by chickens she will just calmly move away from them. Pippy is also great with children. She is not at all phased by my 8 year old grandson even when he is running around with lightsabers and making a lot of noise. She will sometimes jump into the fray herself and engage in playing with my grandson. He likes to use her in his home made videos where she appears to disappear, and is very tolerant of having the green sheet draped over her. She very gently approaches small children whose parents have asked to pet her and will stand quietly while being petted. If she prefers to go sniffing, she just calmly walks away. She does not seem to mind bikes, runners, scooters or kids zooming past her. Pippy seems to take most things in stride. 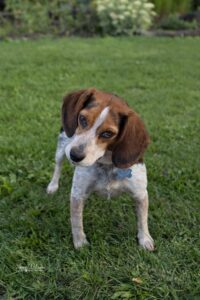 Pippy is a sensitive dog that responds well when walking on a leash, and when she does occasionally gets into mischief. I guess I should let you know that Pippy sometimes does like to get into mischief. She will occasionally put her paws up on the kitchen table or coffee table to see there is any food to steal. (True to her hound dog roots.) If you tell her to leave it, she will quickly back off. She is quite the little thief though. She loves to steal my grandson’s soft toys and put them in her bed or by her other toys. She also steals laundry from the laundry basket to place in her bed, and she will pull out the mitt boxes from the bench and then take the mitts. Lately she has decided to redecorate her doggie bed by stealing the pillows and blankets off the couch and placing them in her bed. A simple off command and Pippy will immediately get down from tables, and a leave it command will stop her from taking any more pillows or laundry. (While you are watching her as she can be sneaky.) That being said, Pippy can be the world’s most stubborn dog. She is not highly food motivated (unless it’s cooked chicken or cheese) although she does like liver treats, and so teaching her formal commands has been a challenge. She will sit for treats, but may not sit for you if there is nothing in it for her. It has been difficult teaching her the “wait” command. Luckily she is generally a good dog so not being 100% on her commands is not too much of an issue.

Pippy loves to go in the car, and will jump up into the back and go into her crate for the ride. She especially likes if the windows are periodically opened so she can catch some new smells. Pippy is pretty good about being handled. She can be picked up and carried. Does not fuss much when doing her nails and is well behaved at the vets. She does, however, NOT like baths. This is a two person job. Pippy is fine in her crate when you are home, but as soon as she hears the garage door shut, she will start to howl for a bit and then she settles down and is quiet when I get home and listen for her before coming in. If I have been gone for a while Pippy will jump up in excitement to see me but she can be very easily convinced to sit for some petting. She may also run around the house in excitement at my being home. She is not much of a chewer, but does get a notion sometimes and will chew the fuzz off tennis balls and try to pull stuffing out of some of her toys. Occasionally she will find something she shouldn’t chew on but if she is provided with a rawhide or denta bone she will happily chew on that. Caution, if you have potted plants, she has been known to try and bury the bones in the dirt of the potted plant, usually pulling out the plant to make room for her bone.

Pippy came to us with a bit of a limp.  We had xrays done and were able to determine that she had some prior damage to her knees and also had a partially torn cruciate ligament.  We had her in for surgery but upon closer examination the surgeon advised us that surgery was not required (YAY) as she was mostly healed already.  So Pippy just needed more time on leash walks and not being allowed to jump off of the couch etc.  But all is better now and she is ready to find her forever home! 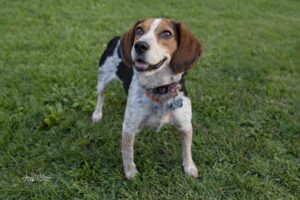 Pippy would probably do well in most homes, but she prefers dogs that are calm like her. While she does engage in play with other dogs, it is not very often. Being a previous momma dog herself, she will reprimand an unruly dog the way mother dogs would their puppies if she is pawed on the head. Then she will turn her back on the dog and walk away. She would do fine in a home with a mature, smaller, male dog but would not like a home with a younger, playful dog or a female dog.   Also while she is great with kids, a home with children 8 years or older who are dog savvy would be best as Pippy’s energy level goes up with when the activity of the household goes up. Pippy also seems to have preferences for people too, although she will approach all people, she is more inclined to wag her tail and allow herself to be petted by people she chooses. It should be noted that Pippy will need a yard that is VERY securely fenced as she will scope the entire fence line to find that one small spot that she can squeeze through or under so that she can go bunny hunting. She will do this every time she is in a new yard. Pippy is a very special little girl and would be a great addition to any family looking for a very sweet, gentle, good-natured dog, that will give her gentle corrections and guidance when needed.