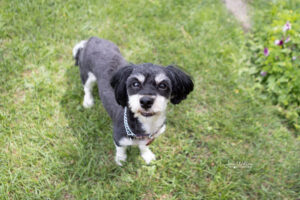 Mr. Rooney is a 2-year-old black and white Shih-Tzu X Havenese, coming in at a whopping 12lbs. Despite his small stature, the two words that best describe him are Brave and Love.

Mr. Rooney came to the rescue from a breeding situation and was severely matted. Soon after coming to the rescue, he was able to see the veterinarian and they had to shave his face and legs which transformed him into a little hedgehog. At this point we considered changing his name to Sonic as his little pitter patter feet and giant, fluffy, matted back were spot on as the fastest little guy around. However, he was able to get into see the groomers and has now taken on the honorific of Mister as his personality truly starts to show.

Roo Roo came to us very timid and scared of the world around him. But in the few short weeks since his arrival his curiosity and desire to learn “how to dog” has dramatically increased. His current safe places are in his comfy crate and his dog bed where he loves to roll around. He’s not a fan of sudden or unexpected movements but ultimately, he loves love. Loves getting love and loves giving love. Mr. Rooney hasn’t figured out how to cuddle yet despite a strong desire to be close to his people. So sometimes when he’s feeling extra brave he likes to stand on your lap with his paws on your chest while you pet him. His other favorite cuddle form is having his small bed (he has a big one too) up on the couch beside you and just lays in bliss as you pet him. He’s always very grateful for pets and will give lots and lots of kisses to the hand that gives him love.

Little Mister currently resides in an apartment and would make a great apartment dog so long has he gets lots of walks. He has started to love his outdoor time so much so that he knows the sound of the keys and will come running.  Rooney goes on 4-5 walks a day ranging from 10 minutes to 30 minutes each. He can walk a lot further than you might expect 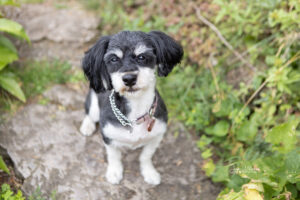 for such a little dog. One very distinctive trait of Rooney is his walk. His back end wants to do something different from his front end. Imagine… a horse and cart. Horse is driving and the cart is swerving back and forth. Rooney also has a little skip he does with back right leg. As if the gears in the other three legs are going full throttle and the back right is trying to keep up. It’s honestly so adorable. The longest walk he’s been on was 3km and after we got back he still had energy to roll around in his bed for 10 minutes before getting up to eat his breakfast and have some water.

When it comes to eating, he’s still learning to enjoy his food. He’s not super keen on dry kibble or hard treats so he usually has his kibble soaked in water for 30-40 minutes before he’s ready to eat it. He does enjoy chewing on Greenies and his salami he gets for going in his crate (his special crate treat only). We have had to “spoon feed” him a couple times to get him going on his food, but usually once he starts eating, he’ll finish his whole bowl.

Rooney is fairly quiet and has only barked when needing to go outside to do his business. Except for one other time when he saw his reflection in the window and scared himself so much a little pee came out. Despite that instance, he is fully house trained. He does like to go out to at least pee every 3-5 hours. This helps prevent any piddling that may happen from a full bladder when his humans try to pick him up. He doesn’t have any specific sign to let his humans know he has to go out though. Mr. Rooney is a champ at using the elevator. He can do stairs so long as they are solid. He gets a little nervous with deck steps but will figure it out with a little help. He is also fully crate trained. He can be a little bit dramatic if his crate isn’t comfortable enough. Once his humans put a bed in his crate, he decided he didn’t need to whine anymore. Why sleep in an uncomfortable space when he sleeps in a comfortable bed all day? He has been crated during the day up to 6 hours and does really well. His new family will need to keep this up as Little Mister needs those safe places to keep growing. 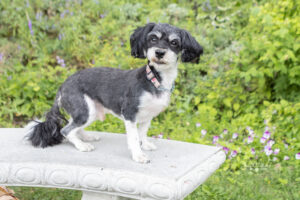 Roonster doesn’t really have any issues with handling. He squirms a bit when picked up and sometimes he does that piddle thing. Because of his history and occasionally nervousness, he will generally freeze when you go to pick him up. This is good to keep in mind as he will need proper grooming and brushing as his new and healthy coat start to come in. He does travel well in the car so even a long car trip will be fine if the groomer is a ways away.  He usually just sits in the back but lately has started trying to look out the window. On those longer trips he does have a bed that fits nicely in the car hammock (because a prince deserves first class), but on quick trips he slums it like the rest of us.

Mr. Rooney is still learning the basics of being a dog from his foster sister Gaia. He’s recently learned he loves soft toys. He likes to chew on them (and other things – phones, tables, cables) though so a close eye is still needed. He responses well to an ‘AH-AH’ when he doing something he shouldn’t be. As for training, he’s still working on basics like sit, wait, and come. Gaia is always happy to show him the ropes and after the few weeks with her he’s starting to get the hang of things. He does “sit” naturally when at a stop. His sit looks more like a squat though. Little Mister isn’t fond of loud noises and will freeze if a loud bang or vehicle goes by. Although he is getting more confident. He is a dog that wants to please his humans though so training with him will go very smoothly.

As mentioned, Roo Roo does live with another dog and one that’s 3x the size of him too. He has been very good with any of the dogs he’s met (large and small) and doesn’t really show much interest other than polite sniffing. Gaia has tried to get him to play with her a few times and he hasn’t really shown any interest. That may change with time though. Rooney also gets along with dog conscious children; he loves them in fact and is very gentle. He is especially drawn to female (adults and children) and would do well in a home with a young daughter (over 8 years old). We think he would love human siblings! He hasn’t spent any time with cats but would probably show no interest in them as he hasn’t had any prey drive out on walks. He could probably take or leave a dog sibling but would continue to enjoy having dog friends if he didn’t have a sibling to maintain and progress in his ‘learning to dog’ education! 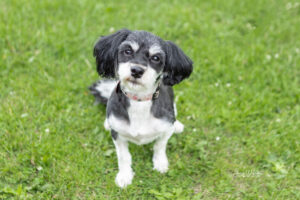 If there is another dog in the home it would need to be a calm and mature one that won’t pester him to wrestle or romp around.

Rooney has a very loveable energy to him. He has recently learned the joys of laying on the couch. Even there he loves to roll around. Sometimes to the point where he finishes on his back with a giant goofy grin in his face. A face that says… “belly rubs please.” He likes the idea of cuddling and will come asking for it sometimes. His two current versions are on a blanket on the couch beside his human constantly getting pets, or standing with his front paws on your chest while getting pets.

While Mr. Rooney’s current routine is eat, sleep, roll, walk, roll some more, sleep, roll etc… His adventurous and brave spirit is growing larger every day. Mix that with his loving spirit and adorable face, and Rooney will make any home a palace.