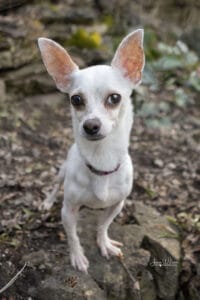 Steven is a three-year-old, 10lb Chihuahua who is full of love, spunk, and energy. Prior to his life in foster care, Steven lived in a puppy mill. The first three years of his life were spent with the sole purpose of producing puppies. When he was no longer able to do so, he was released. Luckily, Steven is young, and he still has many years left to love and be loved.   From the moment Steven moved into his foster home it was very apparent that he was a dog who would warm up to his person quickly. He desperately wanted to live in a world full of love, food, and adventure, and that is exactly what was waiting for him.

This boy LOVES to eat. He knows exactly where his food is stored and if his person takes a step in its direction, he begins his dinner dance routine. He gets up on his back legs and happily jumps around in anticipation of a meal coming his way.  He takes comically large bites of food which he then spits out in piles on the floor and eats from, one kibble at a time. His new family must watch the food storage closely because if you look away for even a second, Steven will be right inside of the bag and he will run off with a sneaky mouthful of food. It is surprising how much food he can carry in his tiny little mouth.  Steven also wants to get his paws on any human food. Early on in his stay at his foster home, Steven successfully landed a flying jump with a 10/10 score for skill when he took a leap and landed with his teeth in the end of a burrito his foster was eating. While it was similar to a beautiful Lady and the Tramp moment, lessons were learned, and human food has been kept far from him while he works on his table etiquette. His new family will need to continue to work with Steven on his desire to eat people food and ensure it is all safely out of his reach.

Something important to note about Steven is that he is hearing impaired.  He can hear some frequencies, but not people, animals, 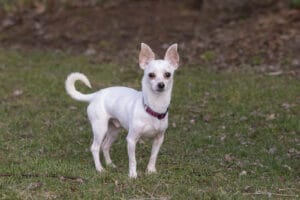 or cars. For this reason, it is very important that his new home is very aware and respectful of his safety and boundaries. When Steven is sleeping, it is important to wake him up through vibration or light instead of touching him. If he is woken by touch without notice he startles and he will vocalize his displeasure with the situation. He also requires space when he is getting tired and ready to settle in to sleep. If he is startled when his guard is down, he will be sure to tell you “no thank you” in a very firm voice. Steven does not like having his ears touched, and he politely requests that you respect this boundary unless it is absolutely necessary. He has never bitten anyone while in foster care, nor has he given indication that he will bite. He just wants 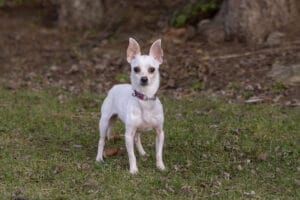 his deserved time to relax without interruption. In his foster home, a consistent routine has been very helpful to ensure Steven gets his space. He gets up at the same time every day, has some morning and afternoon down time in his crate, and goes to bed at the same time every night.  Steven is always ready for bed by 9pm. By having his scheduled down time, he knows when to expect his rests and it minimizes the stress he experiences while napping in the open. In between his schedule downtime, Steven loves to go for walks, chew on bones, enjoy a wet food filled Kong, or snuggle with his person. Steven does great in his crate overnight. He immediately settles and does not make a peep until his person comes to get him in the morning.  When he goes into his crate during the day, he does vocalize some displeasure, but this is short-lived and then he settles in until his person comes to let him out. Because Steven can be vocal, he is best suited for a detached home. For his safety, he also requires a fully fenced, secure yard without any gaps or areas a tiny dog can sneak out of. Steven will do fine in a home with another dog or a cat, although he is curious about cats and will need some supervision while he learns how to respectfully interact with them. We also recommend Steven lives in an adult only home due to his needs for protected boundaries. No visiting children either please.

Because Steven is hearing impaired, instead of common vocal training methods, he has been working on doggy sign language in his foster home. He is not consistently 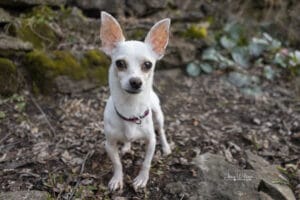 following his cues yet, but with continued practice he is going to do great. So far, he is working on eat, come, no, walk, and yes.  Steven is house trained and knows to go knock at the door when he needs to go out. When Steven knocks, it is important to get him outside quickly because there is very little time between his knock and an accident happening indoors.  Steven is a very smart dog, and he will flourish when enrolled in training classes.

Steven is a darling little dog. He is smart, curious, loves deeply, and has a funny playful side. He loves to burrow into blankets, cuddle his person, and take extra-long sniffs of the fresh morning air. He does well on his leash and loves a good adventurous walk a few times a day. He will tell you he is tired of walking by lying down and pointing his face to the sun for a quick recharge, much like a solar battery. He can often be found curled into the tiniest patches of sunlight beaming through the windows in his foster home.

Steven is ready to find his happily ever after and share all of the love he has been bottling up for the first three years of his life.