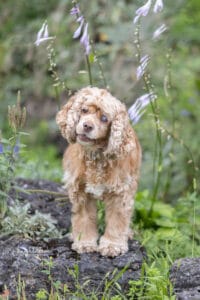 This is our sweet girl, Trudy. She is a 7-year-old cocker spaniel with the softest caramel coloured fur and the biggest puppy-dog eye. Trudy is approximately 20 pounds and would be considered a medium sized dog. Trudy is such a ‘people dog’ – she loves meeting new people and often greets them with a quick sniff and accepts being pet right away. She is kind, quiet, playful, and all-around such a good girl.

Trudy spent her life as a puppy mill dog, where she spent most of her time in a barn inside a small pen. When we first got Trudy, she was very timid and began walking laps around our space trying to understand the layout. After some time of getting familiar with her new home, she has calmed her nervousness and showed us signs that she feels more relaxed in our space.

During Trudy’s time with us, she has worked on her housetraining skills and successfully requests to go outside by sitting by the door. In new environments, Trudy may piddle on the floor, but this is just because she is excited. This will become better as Trudy meets more new friends and goes on more adventures. Trudy loves her crate and she often voluntarily sleeps in her crate during the day. When we leave during the day, Trudy enters her crate with a point into the crate and a command ‘go in’. She is usually rewarded with a treat after this. Once she is in her crate, she is quiet for the night until we open it for breakfast. Trudy doesn’t chew on many objects. Sometimes we will catch her chewing on random small objects, like socks, but she gives them back when asked.

Even though Trudy is 7 years old, she has proven that you can teach an old dog new tricks. Being in a pen for most of her life, she has never encountered stairs, but after some training, she has now mastered the stairs. She will even walk up the stairs randomly, just to remind us she can do it all by herself now. Sometimes she will be so excited to go outside that she thinks she is superwoman and tries to jump up two stairs. Trudy has also learned how to sit with a gesture, as well as “come here”, “down”, “shake” (shake a paw), and is working on “wait” for her food and to go outside (I believe that she will master this before she begins meeting potential adopters). She is very treat-motivated and continues to surprise us with what she learns every day. I am sure she will learn new tricks very quickly with her new family. Trudy’s new family should commit to continuing her obedience training to bring out the best in her. Anytime that Trudy does an undesirable behaviour a quick A-Ah is VERY effective. She will immediately stop what she is doing and look for you.

One thing that we love about Trudy is when she wags her stubby little tail. She gets so excited when we head for the door with her leash or bring out her bag of treats. When we bring her food out for breakfast or supper, she is so happy wagging her tail while running backward, then forwards, then backward again. With all the excitement around mealtime, Trudy is not possessive of her food. We can remove the food mid-eating if we need to add anything and she will wait patiently until she can resume.

Once Trudy feels comfortable in a space, she will show you. If you sit on the floor with her, she will run over and almost immediately flip onto her belly to have belly rubs. If she could have those belly rubs 24/7, I am sure she would. When invited, Trudy will come on the couch for extra snuggles and fall asleep to endless belly rubs (we need to lift her on the couch, as she is too little to jump up).

Given Trudy’s past and neglect of treatment, she developed glaucoma in her left eye. 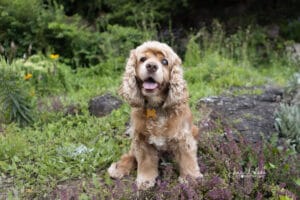 We used eye drops to manage the pressure in her eye, but after some discussions with the vet, it was determined that removal of the eye was the best option for her. Trudy’s had limited, if any, vision in her bad eye so removing that eye did not change her vision. She does rely on us to guide her when she is in a new space (i.e., being careful of new stairs, etc.). In our home, she moves with ease as she quickly learned where everything is and what spaces to avoid. Trudy will sometimes become startled and timid if you go to pet her and she wasn’t aware of it because her vision is not 100%. We try to always hang out a hand in front of her nose, so she knows who is there, and then she gladly accepts any pets that you will give her. Walking can be challenging due to her vision and the fact that she has also never walked on a leash (so, we think she does great). She will walk in zig-zags initially, but with some patience, she eventually finds her stride and walks beside you. Trudy is happy to go on a 30-minute walk every day, sometimes twice.

After Trudy’s first vet visit, the staff removed a mass from her right mammary gland. Thankfully, it was benign and not a concern. She also had her teeth cleaned and 9 teeth removed. She has healed very nicely and is back on her regular dry food diet. Trudy has also been spayed and healed quickly from that surgery too. After her second visit, and as previously mentioned, Trudy underwent an enucleation procedure, which involves removing her left eye. Trudy is healing from her surgery and adjusting to her new reality. She is still such a sweet girl and puts a smile on our faces every day.

We introduced Trudy to some dogs, but she quickly let us and the other dogs know that they were too close. Due to her vision, she doesn’t realize when the dogs have left her personal space and will continue to growl until she knows she is safe. We talk to her until she has de-escalated. This is the only time that Trudy has ever growled and it is completely avoidable. When we go on walks and encounter dogs on a path, she does not react because the dogs are not close to her. It is only when the dogs come close to her and smell her that she will growl. With this known, she would benefit from a home that does not have a dog. Given Trudy does not like to be around other dogs, we also found that she doesn’t like her reflection in mirrors (maybe she is jealous of the perfect dog standing in front of her). We would just make sure that her future home does not have any floor-length mirrors or just does not allow access to those rooms.

We took Trudy for a road trip to a trailer in Port Elgin. We keep Trudy in her crate when traveling in a vehicle. At first, she does not enjoy her time, but after 5 minutes, she stops howling and eventually falls asleep and rides peacefully (even lets out some loud snores as she naps, which is adorable). She was such a good traveler and became relaxed in her temporary new space with new people. 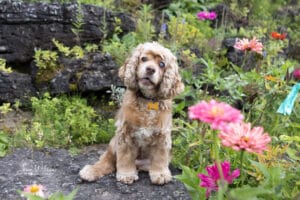 Trudy’s wishlist would include a quiet household with a fenced-in backyard. Her favourite thing in the world is laying on her belly in the grass, kicking her back legs out, and crawling (ideally with someone petting her as she does this). Being outside also brings out Trudy’s playful side. She will crouch down as if to pounce and then jump up to come closer for some more petting and belly rubs. This sweet girl will sit with us all day in the grass, soaking up the sun and the well-deserved love. Although Trudy was good with kids of all ages during short visits, we would recommend a household with older children (ages 12 and up) to ensure care and patience are taken when petting her.

Trudy is such a fun-loving, sweet, and quiet dog. She deserves the best owner or family that will give her endless belly rubs and the attention she needs. Trudy is such a joy to have around our house. Anyone who meets her falls in love with her adorable face and loving personality. We are so excited for her to find her forever home to share her affection