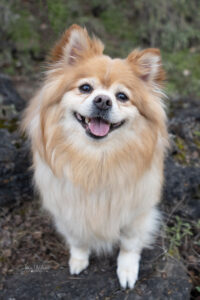 Have you been looking for an entertaining, adventurous, energetic flufferbutt to be your best sidekick ever? Then you are in luck! Meet Yeti, a 7+ year old, 30(ish)lb Pomeranian x American Eskimo cross. He has the most luxurious apricot coloured coat and a zest for life! This is not a dog that wants to spend his life in the house or in the backyard…he wants hikes in the woods, road trips, the chance to meet new people, go on walks with dog friends and to see the world. Don’t think he isn’t about nights of Netlfix and the couch…he does enjoy those things, but there is a great big world out there and he wants to explore it with you.

Yeti was with his previous family from the time he was a puppy but found himself surrendered to a pound because he was not a fan of his owner’s grandchildren. Instead of teaching the kids to have boundaries and give Yeti space, he was continually put in a position where he needed to speak up for himself. He has never bitten, but he will growl and give very fair warning that he is uncomfortable. To this day Yeti is not a fan of being kissed on the head or face or being restrained. He has had enough of that thank you. That being said, Yeti thinks he is a lap dog and is actually very affectionate. He will roll over for belly subs, shower your face in kisses when the mood strikes and would rather curl up on your lap to snuggle than sit by himself. See, Yeti is a loving, physically demonstrative, sweet boy…but he will be best suited to an adult only home, or a home with older teens who will understand he has had enough of being grabbed at, crawled on and hugged in unwelcome ways…and fair enough! In his foster home, he is an absolute love bug and has shown no attempts to bite, or even give a really scary growl but he communicated his boundaries right away and his foster Mom totally respects that…and he has been an absolute joy knowing that he is respected and understood.

This guy is so curious and playful, he bounces around the house and yard like every day is the 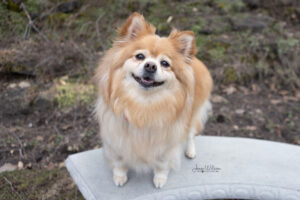 best day ever. He is quiet in the home until you go to leave on an adventure without him…and then he makes his opinion of that known. He settles down after a few minutes, but he is a dog that really just wants to be very involved in his family’s life and not be left behind. He will be best suited to a detached home so that he doesn’t annoy neighbours when you leave. Yeti is crate trained, housebroken and not at all destructive. He is crated when foster Mom leaves the home just to be on the safe side and he willingly goes into it. He currently lives with other dogs and does well with them, but he can get his nose out of joint if someone comes to investigate a toy or bone he has, and when he is snuggling with his person he likes to have them all to himself. There have been no scuffles but you can see that Yeti would do best in a home as the only dog with dog pals he can go on walks or have some play dates with. They need to be social, calm but playful and kind dogs as those are the kind of dogs he really gravitates to. He can often be found grooming the smaller dogs in the home, so he does enjoy the company but could really use someone focusing on just him in the home. Yeti does have a prey drive and gives chase to all the little furry and feathery things in the yard. He LOVES his backyard time, watching all the animals and giving chase. He can be called off fairly easily, but not always and boy he can run when he wants to. A fully fenced outdoor space will be key for this guy. Small animals and cats will also not be a good match for him. He is a fan of toys but isn’t obsessive about them. And has shown no tendency to guard them from people. That being said, foster Mom always trades off something of value for a super tasty treat, so Yeti is never put in a position of having to guard anything.

Yeti wants to make sure that his future family knows just how much he loves trips in the car. And he means, he LOVES them! He gets so excited to go for a ride and is a great road trip companion. He will need a seatbelt harness as he can get excited and bounce back forth from one window to the other. He isn’t over the top about it, but a harness helps him settle in quicker. He does pretty well on his walks but can use some fine tuning on walking manners. It doesn’t appear that anyone taught him to walk beside you without zig zagging in excitement. He is making huge progress, and again this behaviour isn’t over the top, it just needs a little work. After the initial excitement of going for a walk simmers down, he does quite well. He is not reactive when he sees people, kids or dogs and can easily do a 3km walk in one shot. As he has been getting more and more walks in his foster home, his endurance is building, and he will definitely be able to do a 5km walk in no time. He has plenty of energy and loves exploring the world. Hikes on trails are SO much fun for him! As stated at the beginning of his bio, this is a dog that lives for adventure and wants to do whatever you do…he doesn’t want to be left home hours on end with just a walk once a day. His ideal match will be a family that has an active lifestyle and wants 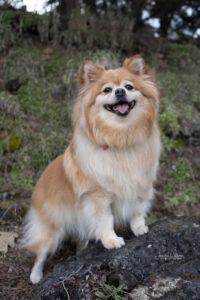 to include him in their life every chance they get. Which is a good thing, because he has some weight to lose. It is clear he didn’t get a lot of activity in his previous home and his waistline shows that quite clearly. He obviously got that way because he ate too much and wasn’t given the activity he requires, because this guy would not be overweight by choice. His family will need to commit to keeping him on a top-quality diet and continuing to work on that weight loss so he can live a longer, healthier life…the one he actually wants to live.

This handsome guy has such a luxurious coat and it will require a commitment to regular brushing to keep it that way, as he was quite matted when he came in. Again, testament to the fact that he was not getting the care and attention he needed. He does shed and will have some heavy sheds a couple times a year but brushing him about every other day keeps things well under control. He also did well at the groomer, even working through all the matts and undercoat he had. His family will need to have a groomer that he can regularly visit that will be kind and take their time with him, and he will handle the visits just fine. The vet however, is a real source of anxiety for Yeti. It doesn’t look like he got a lot of vet visits in in his previous home, so he was very anxious when he went in for his visits with us. He did take some anxiety meds that helped take the edge off, but this is important info for his future family to know…he has opinions about vets! That being said, Yeti is very healthy and just had his teeth cleaned, so he won’t need to see one for a while.

Yeti is such a handsome, silly, adventure loving, devoted and sweet guy…his foster Mom is 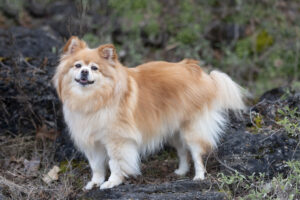 thoroughly enjoying every moment with him. He is truly a showstopper everywhere he goes, and boy does he know it! He loves soaking up the attention of new people and is easily bribed with a tasty treat if he seems a little shy, which happens only once in a while. If you are looking for a mature guy who still has so much life to live, who wants to be a big part of your life and will explore new places with you, he is your guy. He really is looking for that family that will never let him down again, and that appreciates what a wonderful companion he is. If you think that is you, drop Yeti a line…he is waiting for his next life adventure with his people!