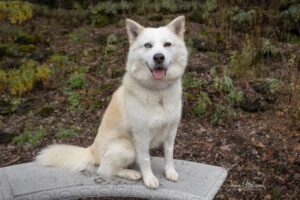 This handsome boy is Yoyo. Yoyo is a happy, calm and enjoyable boy. Yoyo is a 2yr old Husky mix, with one blue and one brown eye. He is a bigger, strong dog, but yet very gentle. His beautiful white fur is now soft and shiny due to a good quality food he is being fed now. Yoyo’s back story is that he is a Manitoba rescue. He was a stray that was on his own for a while defending for himself. He was attacked by a pack of dogs so had some wounds and bad memories to get over and heal. He was brought to our rescue to continue his medical care and then find a great forever home. He is doing so good being in his foster home, able to relax and catch up on much needed sleep and he has healed up nicely.

Yoyo has learned that his daily routine consists of exercise both mental and physical, sleep, cuddles and toy time. He definitely has the personality of a Husky being a bit stubborn, and was not exposed to any training prior so it took some time just get him to learn the command ‘sit’. When he is inside his favourite thing to do is sleep, as long as you’re in the room with him. Really, I haven’t met a Husky so relaxed and easy. His new family will think they hit the jackpot with this guy.

Yoyo is being fostered with another dog, and they really just live together. With Yoyo learning a lot of things from the beginning he hasn’t really figured out the playing with another dog or even toys but is starting to run around with Milo his foster brother. He does understand walks though and loves them. We believe Yoyo would do ok in a home with another calm and more mature dog, but would do best as an only dog, getting all his families attention and love. With Yoyo you will be starting from scratch, teaching him new things. He has mastered cuddles, getting attention. We have been socializing him with other people and dogs, he 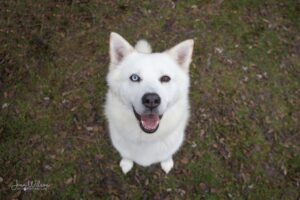 loves people but is a little cautious when meeting other dogs and will stay by your side if unsure. He should only be introduced to calm, very social dogs as he has had a traumatic past with a pack of dogs and we don’t want him feeling scared again. With everyone in the household he will follow you and hang out in your rooms or wherever you are.   In our home situation Yoyo is not left alone very often and when you or anyone is around he will just hang with you or sleep. He is a huge cuddler and kisser, most of the time he won’t let you come up for air.

Yoyo is not overly active, he will get more active with confidence and teaching. We are introducing him to toys, activities daily as he’s not quite sure what everything is. Yoyo gets outside play and training time in between his walks, even though he doesn’t really do much now but stand with you, he will eventually get it.

Yoyo is now familiar with a leash and loves his walks. When it is walk time his routine is to sit at the door so we can put his leash on, then he sits and waits until we open the door and walk out first. On his walks you can tell he is a working dog as he just wants to go and will pull you if you let him so you have to continue the training we are instilling in him to walk nicely on leash. There are times where we make him walk beside us and then other times we let him lead the way buy tying the leash around our waist. If you have kids he would love to pull them on a sled or something similar. He has also ran beside our bike and seems to love that as well. He has come across other dogs on walks and is good with a short greet but still has some bad memories when a dog barks so again, you have to be very particular about which dogs he meet. And he would be fine just continuing past other dogs.   He should never be introduced to a rowdy or barky dog. He gets about a 45 minute walk in the morning and in the evening, oh ya and usually only has a poo on his walks. So a clean backyard for you!! Yoyo is a very satisfied dog when getting his exercise.

In order for him to be the best companion he will need his daily walks, especially until he gets and understand the whole playing thing. It’s really gonna be like having a puppy learning new things. In home training as well as obedience classes need to be a big part of Yoyo’s 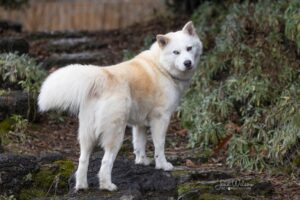 life so that he can learn and build his confidence. With spending the time training it also builds the bond between you.

Yoyo is house trained. He does have some obvious cues when needing to go out, he will pace fast around the house or try and go to another level of the house. The only time he may have an accident is if you’re on a different floor then him and can’t see his cues to needing to go out. Supervision is key with him as with any dog.

Yoyo will sleep in a crate or outside of one. He has no problem being in his crate but loves to sleep outside his crate with his foster brother Milo. We have had him do both and does sleep through the whole night. He really doesn’t mind the crate, he knows he will get a good rest. He should be crated in his adoptive home to keep the routine up and offer him some stability.

Yoyo will need a home that has a fenced backyard, as he likes to be outside just as much inside if not more. He will spend some of the day just laying on our deck looking out and watching all the movements around. He would be happy in many situations; with a young couple that is ready for a new adventure, or a family even with kids (over 8 years of age) as I feel he would be fine as he has never shown any aggression, doesn’t jump up, and has the most gentle kisses or grabs for a treat. If there are kids in the home they need to be of age and maturity to understand that doors and gates must be shut each and every time they are 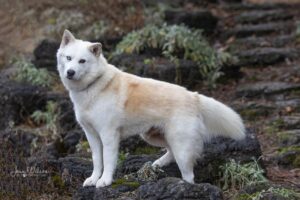 opened as being a Husky, Yoyo would be off on a great roaming adventure if a door or gate was left open. He would be in his glory if he could be someone’s companion for long walks, runs and hikes.   If he gets to have another dog sibling that would be fine for him too, as I’m sure he could learn a lot from them and show him the doggie ways.   No cats for Yoyo though please. With him being a Husky and one that had to fend for himself in his prior life, we just wouldn’t trust him with a cat in the home and want to be on the safe side.

Yoyo definitely is a beauty. His personality is just starting to show and will flourish the more time with us and his new family. If he gets the time, dedication and leadership he needs to provide him with a home full of love, attention and commitment than Yoyo will be a great addition to your family and home.   He will bring so much joy and love to his new forever family.

This website uses cookies to improve your experience while you navigate through the website. Out of these, the cookies that are categorized as necessary are stored on your browser as they are essential for the working of basic functionalities of the website. We also use third-party cookies that help us analyze and understand how you use this website. These cookies will be stored in your browser only with your consent. You also have the option to opt-out of these cookies. But opting out of some of these cookies may affect your browsing experience.
Necessary Always Enabled

Any cookies that may not be particularly necessary for the website to function and is used specifically to collect user personal data via analytics, ads, other embedded contents are termed as non-necessary cookies. It is mandatory to procure user consent prior to running these cookies on your website.