All Pound Dog Rescue dogs are spayed/neutered, vaccinated, heartworm/lyme tested, dewormed, and microchipped prior to adoption. Our adoption donation structure is as follows: Puppies 2-6 months old: $650, Puppies 7 months -2 years old: $550, Dogs over 2 years old: $450. The adoption donation is applied to assist in the costs of veterinary care and the overall care of the dog. 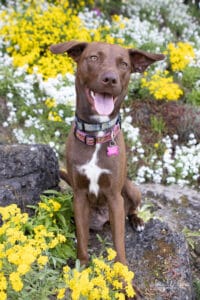 Let us introduce you to Cinnamon! She is a very good looking 1.5 year old Lab/Pointer cross, and she is the happiest, most affectionate dog you will meet! She is large sized, about 50 lbs and 26 inches tall (at the shoulder). Cinnamon is many shades of chocolate, with a swirl of white fur on her chest and a couple white spots on her toe beans. Her eyes are honey colored and it is easy to get lost staring into them as she happily pants, smiling at you. Cinnamon is not only good looking on the outside, but is a total sweetheart on the inside. She loves to do the “spin and plop”, cuddle, and fall asleep next to you on the couch with her head on your lap (despite her large size she sometimes thinks she’s a lap dog), and absolutely loves rump scratches & belly scratches. She has such a happy and goofy personality that will make you cherish her as part of your family.

When we got her, she was perfectly house trained and crate trained already, which was quite a pleasant surprise. We haven’t had a single accident, and she knows that surfaces (even coffee tables) are off limits. Even if she’s sniffing at the edge of a table, she is very responsive and if you call her, she leaves it alone. She has no crate anxiety and will happily hop into the crate on command for breakfast, dinner, or a small treat (even a piece of kibble). She is surprisingly well-behaved indoors. When we are eating dinner or if she is hungry, her way of saying “feed me!!” is to go sit politely in her crate and wait patiently for a treat / kibble. She is also very good about chewing, only biting on her own toys and nothing else indoors (including house plants). She especially loves chewing on her nylabone. Just a warning that she should be supervised when she’s playing with non-indestructible toys. Despite being very good about only chewing toys, she can be…. too good at chewing them. We would strongly recommend a tough nylabone. While with us, Cinnamon has learned how to play tug, and she absolutely loves it. A tug rope would be one of the 3 key toys for Cinnamon (alongside a nylabone and a fabric toy). Unfortunately our yard isn’t large enough to teach her fetch, but we imagine she would greatly benefit from learning it in a safe yard. She also loves to chew and break down sticks outside. She also loves her fabric tiger (who is headless now).

For crate training she can happily stay in a crate for up to 9 hours during the day (while working from home), but really hates to be left alone. She has separation anxiety, which we are actively training away and making progress on. Currently she is perfectly fine with her crate, and will calmly nap all day on the main floor while you work upstairs in your office (this is our current level of progress, she’s getting there). She only exhibits separation anxiety when you actually leave the house. She will be looking for a home where someone is home most of the time, with only occasional shorter times left alone.  She also sleeps in her 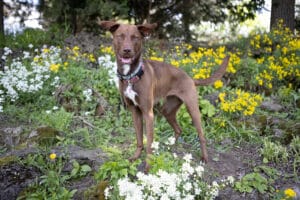 crate at night just fine. We’re still using a treat and telling her “go in your crate” and she happily obliges. She’s usually really good about going to sleep, but if she’s having a tough time settling down, singing a gentle “twinkle twinkle little star” song twice in a row knocks her right out.

Cinnamon gets very, very excited about other dogs. We suspect her previous owners left her alone all day and she developed a strong habit of barking at dogs passing by the front window. We’ve banned her from “front yard TV” and she has learned pretty well to ignore the front door window when told to “come”. But she seems to habitually go to check it when she gets bored. When we got her, she would bark at any dog she saw while on a walk as well (to be very clear, she’s not aggressive at all, just very excited). She gets very reactive when she sees another dog so we have been working on this with her. She has been improving day by day, so by the time she gets adopted these distance numbers will likely be even better. It will be necessary for her future owners to continue this training.  Her owners will need to be experienced with leash excitability training in a dog as well; she is not a suitable dog for a first time dog owner. When jogging with her, she does better and doesn’t need the gentle leader as she is too busy running to get over excited about other dogs. But she still isn’t ready to pass a dog on the same sidewalk. For walking skills: she knows how to heel now, but doesn’t always choose to walk properly, especially if the person walking her is lenient. If given the opportunity, she still goes on sniff missions and will drag you along with her. If you have rules about walking and adhere to them, she can do it but she’s pretty smart and will try to find the cracks in your attention. Make sure to keep a positive rapport with her on walks, but also be strict about her walking behaviour. Higher-levels of obedience training will highly benefit Cinnamon as she is very smart & eager to please her owners. The challenge & mental stimulation provided by higher levels of obedience training will allow this sweet dog to work on some of her finer points and keep her brilliant dog brain occupied. Attending dog school would definitely be a requirement to make sure Cinnamon can reach her full potential.

Cinnamon is a very healthy, athletic, active dog (don’t let her couch cuddles deceive you), and her future owners must be up to the task of keeping her exercised. Successful owners ideally would live very active lifestyles who like to hike/run/jog/be very diligent about taking her on multiple walks per day, or own another active playful dog who can keep her occupied / entertained / exercised. Cinnamon is not a suitable dog for someone who just wants to take their dog for a walk once a day and not much else. She is a busy 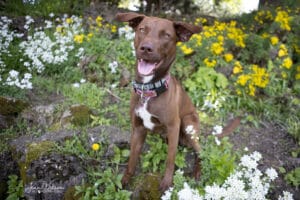 dog who wants to work and looks to her owners for direction. She is quite intelligent and would need some form of mental stimulation to be satisfied. Pretty much any type of dog-work where she is kept thinking and active would work well for her. While walking outdoors, there are a couple things to be aware of. She has a high prey drive and gets very excited about birds, bunnies, skunks and groundhogs. Cinnamon is good with other dogs, but likes to play a little rough and is not a suitable dog to play with smaller dogs or timid dogs.  If her future owners have a dog already, we would want to make sure they’ve already met, so Cinnamon’s enthusiastic approach wouldn’t be so unsettling + Cinnamon calms down if she recognizes the dog already (like our neighbour’s dog). If she does have a future dog sibling, because of her rough play we would recommend pairing her with another dog approximately her size or larger.

It seemed like Cinnamon didn’t have much exposure to car rides previously, and in the beginning would get car sick fairly often. She has been improving a lot in the past few weeks and she hasn’t gotten sick in the past 2 weeks.

·       Cinnamon is perfectly fine with men & children, but because of her enthusiasm we would recommend a family with kids above           the age of 12 or so (she could accidentally knock over a small child when she wants to enthusiastically say hello).

·       Because of her high prey drive, no cats, other animals, or small dogs

·       A fenced yard that she can run around in is required 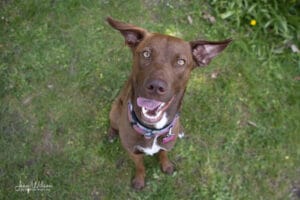 She is such a fun dog to have around. She is very affectionate, and will lean on you, sit on you, lay down beside you, give you small kisses, and receive all the scratches. She has a hilarious habit of trying to itch herself while standing, but she can’t reach. 50% of the time she realizes, and sits down to continue itching but sometimes just gives up and walks over to you. She loves to roll around in the yard, sniff everything, follow her humans around, and at the end of the day hopefully catch a few Z’s sleeping at your side. She is very loyal and loving, and we want to make sure that this big sweetheart makes her way to a great adoptive family that will take care of her for the rest of her life.

This website uses cookies to improve your experience while you navigate through the website. Out of these, the cookies that are categorized as necessary are stored on your browser as they are essential for the working of basic functionalities of the website. We also use third-party cookies that help us analyze and understand how you use this website. These cookies will be stored in your browser only with your consent. You also have the option to opt-out of these cookies. But opting out of some of these cookies may affect your browsing experience.
Necessary Always Enabled

Any cookies that may not be particularly necessary for the website to function and is used specifically to collect user personal data via analytics, ads, other embedded contents are termed as non-necessary cookies. It is mandatory to procure user consent prior to running these cookies on your website.