Please read our dog bios carefully to be sure that the dog you are applying for suits your family and lifestyle.
We at PDR believe in the benefits of post-adoption training for our dogs and their families. This allows for continued socialization, learning and helps to create a well-mannered and balanced dog. Post-adoption training is a requirement in our adoption process.
To apply for adoption and for more information on our process and requirements, visit our website at https://pounddog.ca/adoption-info/.

We are thrilled to introduce you to Auggie!! 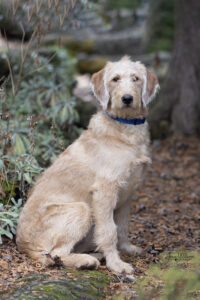 still to do! He came into Pound Dog’s care from a puppy mill where he and his sister were unsold pups with very uncertain futures had they not found their way into rescue. As such, Auggie came to us in a neglected and fearful state but has come so far in a short time. Initially, he was very timid and scared of the world around him. This included humans, traffic, doors, doorways, sounds in general, and even other dogs. He has been in a safe and comfortable environment for a few weeks now and while still slightly timid with some aspects of the world, his bravery has certainly come through strong. Auggie is most brave when there are other dog conscious humans who don’t make sudden movements or loud sounds. To these humans he wants to give and receive all the love. So, once he feels comfortable with you, expect almost non-stop kisses. Having a foster sister around has helped a lot with learning “how to dog”. Things like leash walking, bathroom breaks outside, playing with sticks, and proper play are now part of Auggie’s repertoire.

Auggie currently lives in an apartment and would do well in an apartment so long as he gets ample walks and play time. He would much rather prefer a fenced backyard though, especially if there are lots of sticks he can play with. He’s fairly quiet and has only barked a couple times when he was scared. He does have a high-pitched quiet whine that he does when he wants attention, and it gets higher when he’s playing and excited. Auggie loves a good area rug (or carpet) as well. He does most of his relaxing and playing on it. He currently doesn’t go on any couches or beds but always shows some desire to.

He’s still working on house training. When he’s out of his crate he still needs to be taken outside for a pee break about every two hours but that will increase as he gets older. He really loves to drink lots of water so after play session he needs to go outside sooner. He hasn’t really figured out a way to tell you he needs to go out but most of the time you pick up on it. He uses the elevator with no issues now and basically rushes on if it’s empty. He hasn’t really tried stairs yet but he’s a fast learner. When outside he does have specific area he likes to pee, so it might take him a moment to find his new spot.

Auggie is crate trained and will go in his crate with direction and a stinky piece of salami (a treat he only gets when going in his crate). He sometimes softly whines for a bit and will stop with an “ah-ah” correction but usually will stop on his own. He does really well crated with or without a chew to keep him busy and has no issues for 8-9 overnight (in the common living room area). During the day he usually is crated 3-4 hours and then 1-2 at night with a max of 5-6 at a time. He’s still young though so he does need those bathroom breaks. For the next white, Auggie will need someone who works from home or who can come home mid-day to let him out and go for a walk.

Auggie does get fed in his crate twice a day at 20-minute intervals. He usually starts by inhaling his food rather than chewing it. From 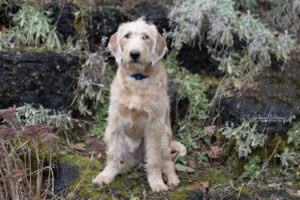 this we considered naming him Hoover. He usually leaves some food in his bowl though. Initially he didn’t want any treats, but more and more he is enjoying different types. He especially loves stinky ones. Chews are also great for Auggie as he takes his time with them. He isn’t possessive with his food or treats at all either which helps with training and handling. He has no issues with handling and will let you touch any part of his body. We’ve started to brush him a bit which makes him a little nervous but we make it as positive experience as we can for him. This will need to continue in his new home as he will need to be comfortable with brushing and grooming as a doodle breed.

Auggie hasn’t done much training outside of basics right now. He will naturally sit when waiting and he knows when you’re calling him. He is a dog that is happy to please and is quite smart too. So training will hopefully be a breeze for him with consistent direction. Training will be important for him as he is (and will become) a bigger dog. He has learned the joys of walking outside and experiencing nature. However, we are still working on not trying to trip his humans. When he’s nervous (from traffic or loud sounds) he tends to try and cut in front of us either as a “let me be close to you reaction” or a “I’m going to herd you in a direction I want to go”. He currently walks using a Martingale collar but will probably need a gentle leader as he gets bigger and more confident. He is a naturally curious dog but is still hesitant with new things. If he hears a loud noise or gets startled from something he does try to bolt in the opposite direction. This can lead to some pulling especially if we’re close to home as he simply wants to feel safe again. Usually though he prefers to stop and stare and is happy to meet people when approached calmly. When walking with his foster sister he loves to walk beside her. When on solo walks he tends to walk directly beside his human or slightly behind while constantly checking in. With more walking and more exposure Auggie will be the best walking buddy around.

Being younger Auggie has lots of energy. He currently goes on 4 x 10-30 minute walks a day with those extra pee breaks mixed in. He’s done a few 45-minute (3km) walks with ease as well. Auggie loves to roll around on the floor and is actually great at playing by himself. However, being the age he is he will destroy a toy or unsuspecting phone cord if not supervised properly. He basically loves to put all the things in his mouth currently, including toilet paper, plastic, or anything else lying around on the ground (inside or out). Auggie also naturally loves to play fetch. We will throw a stuffy and he stares at it for a second then trots over to bring it back to the area rug where it is ‘supposed to be’. He also enjoys playing with tug ropes and chewing on antlers or other hard chews. He can get very hoppy and pouncy when worked up and playing. 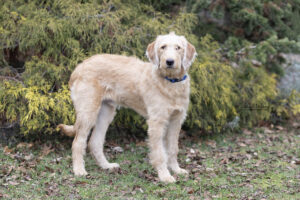 Auggie hasn’t done much traveling in the car but the traveling he has done has gone very smoothly. He is good in the car and usually only does some light panting at the beginning before settling in. He initially didn’t understand the getting in and out of the car part but is becoming more natural at is as time goes on. The longest car ride he’s had was about 20-30 minutes and he sits in a backseat ‘hammock’ cover and doesn’t try to get into the front.

When it comes to socialization, Auggie has met a few other dogs and is usually nervous at first but warms up quickly. He has also been great with his foster sister. You could say he’s done better having an older sibling to show him the ropes. He tends to mimic her play style as well. He is still working on boundaries as he just wants to play or receive love all the time. He is also a fan of using his mouth and big paws. He’s usually gentle with his mouth but he will continue to need reminding that mouthing is not appropriate manners. He will also need some reminders if he is pestering a bit too much. Because of this, he would do best in a home with children over 8 years old (if any).

Auggie is still a growing boy so his body is still a little awkward at times. Expect him to run into you accidently or maybe knock over (or step in) his water bowl. His tail likes to smack into things as well since it’s almost always wagging. As he learns that his body is bigger than he maybe thinks it is some of this will probably stop but the sloppy water kisses and happy tail wags won’t. Auggie loves to be close to his humans which means that while he’s out of his crate he likes to follow his human around if they are moving from room to room.

Despite his early neglect, Auggie is an extremely happy dog and will fill any household full of love. He would do better with dog conscious people and families with older children due to his nervousness and learning proper manners/etiquette. He doesn’t need to go to a home with another dog. As long as his humans are committed to teaching him how to love life and live that dog free lifestyle Auggie could be a great single dog to a loving family.